Adam and Corey use Winter Park as their training base during the northern hemisphere season and were glad of their home advantage in today’s challenging weather conditions. A foot of snow fell overnight and more throughout the day.

“I had two pretty good runs in tough conditions which I was happy with,” reported Adam and added that it was “not a bad way to start the New Year.”

Adam Hall will now travel to Canada to compete in the first IPC World Cup of the Northern Hemisphere season. Corey Peters will remain in Winter Park for tomorrow’s Giant Slalom before joining Adam in Canada. Both athletes have been selected to represent New Zealand at the 2014 Winter Paralympic Games in Sochi, Russia in March.

Official Results from the 2014 Winter Park Open will be available at: http://www.paralympic.org/alpine-skiing/calendar 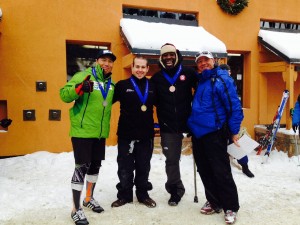