Peters and Hall have been competing in the two-day IPC (International Paralympic Committee) World Cup event hosted by Snow Sports NZ at Mt Hutt. Today’s schedule involved the high speed discipline of Super-G with Hall placing third in the men’s Standing category and Peters third in the men’s Sitting category.

Mt Hutt turned on another perfect day for the racers with clear skies and hard, fast snow conditions which made for tight competition. In the men’s Sitting category only fractions of a second separated the top three places with The Netherlands’ Kees-Jan van der Klooster first in 1:02.85, Tyler Walker (USA) second in 1:02.86 and New Zealand’s Corey Peters third in 1.02.90.

The World Cup event has attracted an extremely high standard of competition with the majority of the field focussed on gaining valuable qualifying points for the Winter Paralympic Games in Sochi, Russia in March 2014.

For Peters and Hall it has been an opportunity to measure their performance against the world’s best and Snow Sports NZ Adaptive Manager, Jane Stevens, says they can both be extremely proud of their achievements.

While both athletes agree there is plenty of hard work still ahead of them, the Paralympic qualifying campaign appears to be on track.

Adam Hall says that he is “pretty satisfied” with today’s results. The last few months have been a matter of “chasing down the difference between the top placings and that gap is getting smaller and smaller.” Hall says he now feels “quite confident leading into the final months’ preparation ahead of the Games.”

“It was good to back up yesterday’s podium result with another medal today,” commented Peters who claimed a gold medal in the Super Combined event at Mt Hutt yesterday. He also won a silver medal in the World Cup Slalom staged at Coronet Peak last week as part of the Audi quattro Winter Games NZ. Adam Hall won two gold medals in the slalom events at the Audi quattro Winter Games NZ.

Corey Peters’ competition schedule will now take him to Australia where he will compete in two Slalom and two Giant Slalom World Cup races while Adam Hall will be focusing on training for the next few weeks. 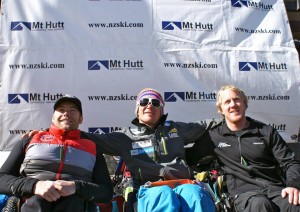