Weather conditions made for a tough day with competitors battling freezing temperatures and strong wind. Conditions in training had been so difficult that riders struggled to gain the necessary speed and event organisers made the decision to cut the last jump.

Stefi Luxton was the first of the Kiwi riders to take the course. She maintained focus despite a crash in her first run, to score 77.3 in the second run and qualify fourth in her heat. Rebecca ‘Possum’ Torr also had a strong second run which put her in fifth place in her heat with a score of 77, just missing out on finals qualification. Shelly Gotlieb (Ohakune) suffered a disappointing day, crashing on a backflip off the first jump in run one and then again on a cab 5 trick on run two.

Straight on to the finals with Stefi Luxton the first rider to start and struggling for speed under challenging conditions. After a crash on the first run she nailed a backside three on the second run before under rotating on a front side 540 and so failed to score as highly as she would have hoped. Nevertheless, Luxton reported that “it was a fun day of snowboarding in some challenging and tough conditions” and she was pleased with the result. She was also “really happy to walk away without injury” after other riders suffered a less fortunate fate.

Tom Willmott, Snow Sports NZ Head Coach for the Park and Pipe team, was also “extremely happy with today’s results and pleased to see the team remain positive despite the challenging conditions.

“Having two out of three riders in the top 10 is definitely a good start to our Olympic campaign,” he said.

Slopestyle snowboarding is a newly added Olympic sport and will feature for the first time at the Winter Olympic Games in Sochi, Russia in 2014. The Sprint US Grand Prix is classified as an International Ski Federation (FIS) event allowing riders to collect Olympic qualification points. For the first time ever athletes will also earn 5 Star World Snowboard Tour points at a FIS World Cup event.

Click here for results from the women’s snowboard slopestyle 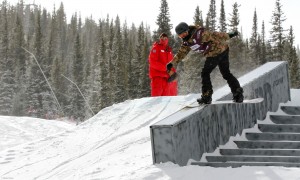