Kiwi Freeride skier Craig Murray (Christchurch) has claimed third place in the Men's Ski category at the invite only Freeride World Tour. Today was the first stop of the 2022 tour held in Baqueira Beret, Spain.

Due to the Covid-19 Pandemic Craig remained in New Zealand last Northern Hemisphere winter but proved he is still at the top of the Freeride game with a very impressive run today.

Called the Human Highlight Reel by commentators, Craig dropped into the venue and showed his trademark creative skiing with three 360-degree rotations in his run, including a huge stomped corked 360 off a large cliff.

Craig was rewarded a 90.00 for this run, initially putting him in the top spot, but after all the athletes had dropped in, he finished up in third place.

Commentators who spoke to Craig prior to the event shared how Craig has changed his mind set this season and his plan is ski runs that are fun and hopes that the fun translates into high scores from the judges.

There are five Kiwi athletes competing on the Freeride World Tour this year. Joining Craig in the Men’s Ski category is Blake Marshall (Queenstown) and Jamesa Hampton (Christchurch). Jess Hotter (Ohakune) is holding down the fort in the Women’s Ski category and Claire McGregor (Wānaka based while in NZ) is competing in the Women’s Snowboard Category. 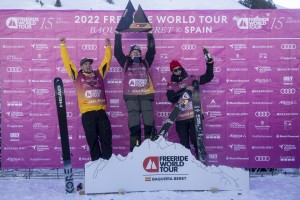