With a raft of talent on show at Wanaka Treble Cone Murphy made the most of his testing home course to claim a third placed finish in the SB LL2. “I’m rapt with the podium finish today, it was not quite the win but it is part of the building phase and I will take it. Yesterday was more of a training day for me, building into today’s World Cup. The field was stacked with Paralympic medallists so it is good to know that I can still be competitive against the best in the world.”

The result extra special for the 38-year-old who nearly gave the sport away during the past 12 months. “I always race to win not to come third, but given what I have been through with my injuries I’m still rebuilding in some ways. To come away with a podium finish at a World Cup is epic. In 2015, I ruptured by ACL which put me out of riding for about 12 months and I went through six months of rehab. And then my first race back in 2016 I ruptured by patella tendon on the same leg. So, a year ago I was not sure if I was going to make a comeback. The rehab was brutal and I wasn’t progressing quite as fast as what I wanted. I guess it shows my determination in some ways, I just really want that Paralympic gold. I just want to go to PyeongChang and ride the way I know that I can ride and be competitive. Obviously, I want the gold.”

The women were the first to take on the steep sun soaked course with Qiaorong Pang (China) winning the Women’s SB-UL in 1:26.23. American Nicole Roundy won the Women’s SB-LL1 in 1:19.58.

Roundy said, “I was racing against the clock today and the outcome was good. I was excited to see what I could achieve at Treble Cone. It was a great first step in my training so early in the season.”

Next up was the Women’s SB-LL2 where yesterday’s winner in the Southern Hemisphere Cup, Joany Badenhurst (Australia) once again took gold in 1:10.52. She was followed by Cassie Cava (Great Britian) in 1:18.52 and Brittani Coury (USA) in a time of 1:20.68.

Badenhurst said, “The course is pretty amazing. It is really challenging and quite difficult, making the riders put their best ride forward. I have been snowboarding for going on four years, with back to back seasons since Sochi 2014 and I have seen a lot of courses. There has been so much work put into this course by the designers and they have nailed it.”

The first men down the mountain were the Men’s SB-UL classification where Michael Minor (USA) won gold in a time of 1:08.04, followed by Simon Patmore (Australia) winning silver in 1:08.66 and bronze to Zhuo Chen (China) in 1:09.15.

Minor said, “It feels amazing to have won for the first time. We all have found it pretty challenging out there today. I had a great first run with my fastest time. This is our first qualifier for the PyeongChang 2018 Paralympic Winter Games so I could not be happier.”

Elliot said, “It felt awesome out there today and I had a lot of fun. Today was a great way to build on all the great memories I am making on my first trip out of the States here in New Zealand. I’m really stoked with my runs today. I know I will have made Mum proud.”

The Men’s SB-LL2 was hotly contested with the lead changing several times. Michael Shea (USA) came out on top with his final run of 59.00. Although he took the lead on the second run Shea was took fast and Ben Tudhope (Australia) won silver in 59.28. Pushing the leaders all the way was Wanaka local Carl Murphy (New Zealand) in 1:01.21.

Shea said, “It was great fun out there and I have always enjoyed more of an alpine snowboard set up. After this event, I will be taking my fiancé for a vacation to Paris before the season really gets underway. From November right through to Christmas we will be on the road in Europe, so I just wanted to take advantage of some downtime. I have been part of this sport for nearly eight years. I have seen this sport grow exponentially. The level of riding has now gone up so much that you have to be on your A game if you want to get anywhere near the podium. PyeongChang is going to be really good.” 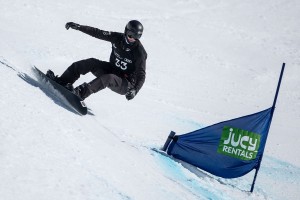