Another action filled day was a fitting end to the 2013 K2 Big Mountain CHILL Series. Fortunately the weather played ball and the competitors stepped up. With a two run competition (both runs counting) you could forgive the athletes for playing it safe but they threw caution to the wind and went for it. There were no shortage of big lines and huge airs, not to mention more tricks than a magic shop.

Top honours on day two in the female snowboard went US born but locally based Tess Carney; however, two solid performances saw Mikaela Hollsten take out the overall honours. The male snowboard division was once again dominated by the Dutch competitor Irian van Helfteren who sent a huge air at the bottom of the course to seal the title. Justin Bobb from the US put in another strong performance and made light of the challenging conditions at the top of the course.

In the ski section the female division saw the strongest field to date and the level of skiing was simply awesome to watch (be sure to keep an eye out for the video edits coming soon). The Swedes took out third and second spots on the podium thanks to some strong, fast skiing. Top spot went to ex-ski racer and Kiwi, Taylor Rapley in her first big mountain event who skied a fast and tight line which included two solid airs.

Overnight leader in the men’s division Sam Lee took a go big or go home attitude and looked to have it in the bag until coming unstuck on the bottom of the course, backslapping on a double drop and washing out. The 15 year old wild card entry of Craig Murray once again impressed the crowed and judges with his mix of old school (daffey) and new school tricks on the big mountain venue resulting in an impressive 4th place finish overall. Local and crowd favorite Cam McDermid threw down a solid run and climbed to third overall nudged out but another big run by the US’s Jason Waters who’s pre event energy was clear to see in his skiing. Walking away with the glory and the 2013 K2 Big Mountain title was the Line skier, Tom Brownlee from Mt Olympus (Host of next year’s K2 Big mountain CHILL Series).

Event organizer Stu Waddel was ‘excited by the level of skiing and loyal following the event has established’. He and many of the competitors are now making the pilgrimage from Craigieburn to the next leg of the CHILL Series at the Freeride Mecca of Temple Basin for the Black Diamond Big Mountain next weekend. With recent snow and a solid base up high the conditions look good for another great FWQ event. Stay tuned for more! 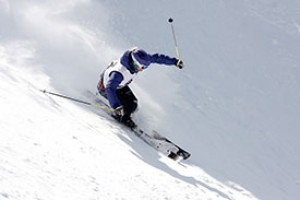