K2 Big Mountain Opens to the Glory of Winter

What a day! Day One of the K2 Big Mountain did not disappoint.  However, things were quite different leading up to Day One.  We had planned to have a ski day prior to Competition day, offering a chance for newbie rope tow riders (the kiwi nutcracker) to get to grips with Craigieburn.  However, the temperatures were too warm and the mountain was closed in the interest of preserving the access tow.  A lot can happen in 12 hours, overnight 5-10cms of snow fell, temperatures dropped and 50 keen skiers and snowboarders turned up for one run in Middle Basin Chutes.  It was cold on top, but there was plenty of smiles as winter is back!

Craigieburn offers freeriders excellent terrain and challenging conditions.  While the wind was blowing, the snow was fresh and the chutes had plenty for the keen eye.  The K2 Big Mountain is a 2 star Freeride World Tour Qualifier event. Skiers and snowboarders select a fall line in steep terrain and ski through to the bottom of the course.  Judges are looking for the rider’s line choice, their style and technique, control and fluidity, and the entertainment factor.

Mikaela Hollsten from Finalnd won the female snowboard section and Sarah Hutman was second.  In the male snowboard division first was Irian van Helfteren from Netherlands and previously competed in the 2013 FWT.  Irian was new to Craigieburn and picked a line demonstrating solid airs mixed with technical riding. Justin Bobb, a lively competitor from USA was second.

In the ski division, the K2 Big Mountain had its strongest female field since its beginnings in 1999.  Elin von Friedrichs from Sweden was first, Taylor Rapley from New Zealand second and Marian Krough from Canada was third.  “We are stoked with the level of skiing amongst the females.  They bring a new energy to the K2 Big Mountain and the top 6-8 competitors are very closely placed’ said Sarah Fischer former New Zealand Freeskier Champion and event judge.

In the male field there were 29 competitors from nine nations.  First place went to Sam Lee from New Zealand, second to Jason Waters from the US, and third was local skier Tom Brownlee.

“Sam Lee stomped his run today, skiing an innovative line.  From the top section there was a steep drop in exposed terrain, and Sam showed he has lifted his skiing to a new level.  He took a double drop in the last section to finish his run in style.  He was a deserving winner,” commented Charlie Lyons, event judge and FWT athlete.

Also, skiing well today was Craig Murray who at the age of 15 was invited to attend after winning his age group in the CHILL Junior Big Mountain Champs.  Craig placed sixth equal, a great result. 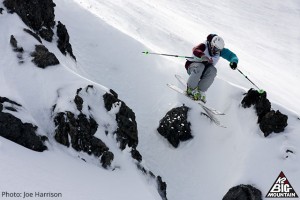