Valmalenco, Italy- (3 April 2014) – The 2014 FIS Freeski and Snowboard Junior World Championships is a wrap, the New Zealand team having achieved a podium result in each sport. Beau-James Wells claimed New Zealand’s first Junior World Championship title, taking out the freeski halfpipe, while Lyon Farrell was the stand out performer in the snowboarding disciplines of halfpipe and slopestyle with a second and fourth finish respectively.

The final day of competition saw Beau-James Wells vying for an additional Junior World title to add to his halfpipe success, this time in slopestyle. Despite having a run which had the potential to get him on the podium, Beau fell short of his goal, unable to execute his run to the required level in finals: he finished in 11thplace.  The previous day saw Jackson Wells narrowly missing out on a berth in slopestyle finals by just one place after landing his first switch double 900 in competition. Duncan Campbell competed in snowboardcross, racing in a strong field which included multiple Olympians, and finished in 21st position.

The New Zealand team of four freeskiers and four snowboarders trained and competed across a 12-day programme with 15 starts in five disciplines, and were supported by a four-strong coaching staff: Pete Legnavsky (Head Coach), Tom Willmott, Bruce Wells and Sean Thompson. New Zealand selection criteria for this event involved the demonstrated ability for athletes to make the cut to finals and all our athletes achieved this - some in two disciplines.

“The event has been a fantastic learning and development opportunity for all involved and we look forward to heading back to New Zealand to prepare for the upcoming winter and the opportunity to progress skills further and step up to the next challenge,” said Tom Willmott. 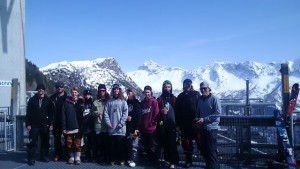