For many years, The Junior Nationals has provided a development pathway through to elite level competition with several New Zealand Olympians and Olympic hopefuls beginning their careers at this point.

Today’s competition showcased the talent of New Zealand’s young snow sports athletes and demonstrated that the future of the sport is in good hands.

In the Salomon Snowboards Slopestyle the competition format across all divisions was a straight two run final. Westons Gap Fun Park was the venue for the younger competitors and low early morning temperatures meant that the snow conditions were hard to start. However, this did little to curb the young snowboarders’ enthusiasm.

Amarnie Barber executed a good clean run to win the girls’ Ruggies division while Campbell Melville Ives won the boys’ Ruggies division, impressing judges with his stylish run including a back three, method grab, board slide and 50-50.

Charlotte Lyell and Zephyr Lovelock were the winners of the Grommets’ division. Lachlan Blackmore took out the Ripper boys’ class, pulling out a front three indy, cab five with a clean grab, 180 onto the flat box and a backboard on the bottom rail.

Cool Wakushima was the only girl competing in the Rippers age group but judges were quick to praise her run, commenting that “her tricks were more technical than many of the boys’ tricks in her division.”

The girls’ shredders saw a hard fought battle between Georgia Crisp and Zoi Sadowski Synott. Georgia had the lead after the first run but Zoi came back with her second run to take the overall win.

The boys’ Shredders and boys’ and girls’ Youth and Junior snowboard slopestyle took place in the Upper Heavy Metal Park. Head judge Mike Hygemann commented that “the standard of riding has improved so much from last year, and last year was impressive. The riders have taken it up another notch and we’re seeing the real wow factor. Bring on 2018 (Winter Olympic Games).”

The top three in the boys’ shredders division came very close in their scores with Daniel Bohinc emerging as the winner.

In Youth girls Lucy Hayes was commended for impressive amplitude and solid airs and took out first place. In Youth boys Matthew Cox impressed judges with his controlled run which “looked like slow motion in the air” according to Head Judge Mike Hygemann.

Georgia Baff was the “convincing winner” of the girls’ Junior division and her run stood out for her stylish grabs. While in Junior boys Carlos Garcia Knight’s “outstanding” run included the first ever double seen at the Junior Nationals. It was also the first time he had landed the trick in competition and Carlos was understandably “happy to land it when it counts.”

“When I saw the blue skies this morning I knew it was going to happen today,” said Carlos.

With the snowboarders landing tricks in the park, the skiers were focussing on the speed events of dual giant slalom and ski cross.

Winner of the girls’ shredders’ division, Alice Robinson, commented that “the snow was soft and the course was quite tight but I really enjoyed racing against a few different people and with the freeskiers.”

Junior Nationals provides a unique opportunity for athletes to step outside of their more familiar competition environments and try their hand at different disciplines. Beau-James Wells, now a familiar name in the park and pipe arena and likely candidate to compete at the 2014 Winter Olympic Games, took himself back to his ski racing roots and posted winning times in both the Smith Ski Cross and the Dual Giant Slalom.

While Beau-James competed in ski races until the age of fifteen he hasn’t done so for the past few years and “didn’t know what to expect today.” While commenting that he had enjoyed his day of ski racing, the Wells’ love of freestyle was still apparent. Beau-James managed to incorporate a mute grab on the first corner of the Ski-Cross corner “to stay balanced.”

The slalom course was set on the Race Course Trail and racers competed side by side two at a time. Each racer completed two runs with the combined time deciding the final placings.

Three year old Zora Legnavsky was the only competitor in the girls’ Ruggies division and stood proudly on top of the podium at the afternoon’s prizegiving, followed shortly afterwards by older brother Gustav who won the boys’ Grommets division. Bayley McDonald was the boys’ winner in Ruggies and Shiloh Teen the fastest female in Grommets.

Top podium places went to Zac Teen and Sam Hadley in Rippers; Alice Robinson and Maxwell Watt in Shredders; and Cameron-Leigh Murphy and Samuel Richards in the Youth category.

In the Smith Ski-Cross racers first completed a single time trial on the Speed Zone Gravity-cross track. The fastest racers in each age category then moved through to elimination rounds to race head to head, four competitors at a time.

Not to be out done by the winning result of his snowboarding twin brother Finley Melville Ives was the fastest ski cross racer in the boys’ ruggies division, while Gustav Legnavsky was once again victorious in the Grommets’ division. Illume Sadowski Synnott was the fastest female Ski-Cross racer amongst Grommets.

Zac Teen backed up her win in the Ski Giant Slalom, also winning the girls’ Rippers division in the Ski-Cross with Blake Hartley the fastest boy. Sophie Thompson and Julius Staufenberg won the Shredders with Tully Robinson and Jackson Wells topping the podium in the Youth category.

Competition continues until Thursday with the following events: 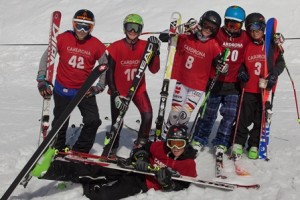