For the first time, this year’s Halfpipe competition has been sanctioned by the International Ski Federation (FIS) and, for snowboarders, the World Rookie Tour. For skiers and snowboarders starting out on a competitive pathway, this provides an opportunity to benchmark their results on an international scale.

Mitchell Davern was a standout in the senior snowboard division, winning his Junior Nationals age category, claiming a World Rookie Tour title and placing second on the FIS results table, adding to his win in the Boarder-cross yesterday. With two chances to earn a top score, Mitch decided to take a chance on his second run, adding a crippler 720 on the last hit and landing it clean.

“I really wanted to push myself to see if I could get on the podium,” said Mitch. “Everyone was throwing down so I decided to try the crippler. It was a bit risky because I haven’t landed it that much so it was really cool to put down my run.”

Zephyr Lovelock won the Intermediate Snowboard Boys’ age group, claiming a Junior Nationals medal as well as a World Rookie Tour title. The judges were impressed to see him grabbing every spin, tweaking the grabs and maintaining consistent amplitude down the pipe.

In the ski field, Cardrona-local Ben Harrington earned his second Junior Nationals gold medal for the week, with the top score in the Senior male ski division as well as the FIS results. Ben started out his run with a big cork 900 and finished with his personal highlight, the left flair. “I’m hyped to be back on the podium,” he said following his victory in the Freeride competition on Tuesday.

Amongst the younger age groups, the judges were impressed by the ski primary age 5-6 year boys airing above the lip of the pipe.

The ski competitors also took their turn on the race course today, competing side by side two at a time in the Dual Giant Slalom. Each racer completed two runs with the combined time deciding the final placings.

The youngest skiers in the field – Primary Girls Years 1-2 – were also some of the most competitive with winner Abigail Wiggins finishing just 0.14s ahead of second-placed Chloe Willmott and Olivia Hein only 0.44s off the pace in third. Primary Years 5-6 competitor Charlotte Wiggins was the clear winner in her category with a lead of 3.88s.

Gustav Legnavsky went two from two in the boys’ Intermediate division, winning the Dual Giant Slalom as well as the Halfpipe, adding to the gold medal earned in yesterday’s Freeride event. 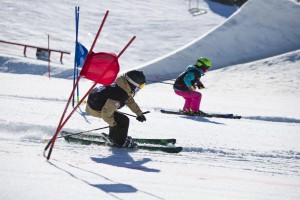