Lake Wanaka, New Zealand (5 October 2017) – Calm conditions and blue skies set the scene for the Smith Ski and Snowboard Slopestyle on day three of the Snow Sports NZ Junior Ski and Snowboard National Championships at Cardrona Alpine Resort today. With International Ski Federation (FIS) points, World Rookie Tour and national titles all up for the grabs, there was plenty to play for and competitors across all age groups battled hard for the top spots.

The Primary age groups and Intermediate girls competed in the Lil Bucks Park. One of the first and youngest competitors to drop into the course, Queenstown skier Olivia Hein in the Primary 1-2 age group, set the bar high by spinning a 360 off the jump and a 180 on, 180 off the first box.

The Primary Boys’ age groups were hotly contested in both ski and snowboard and the judges were very impressed by the progression of the tricks. Finley Melville-Ives earned his gold medal in the ski division with a high speed unnatural 180-180 off the top box giving him enough speed to land a huge and stylish cork 7.

The Intermediate Boys and all Junior and Senior competitors split their day between the Antlers Alley and Stag Lane courses with two runs on the jump line and two runs on the rails. The skiers started on the jumps and the Senior Boys’ age group saw a close competition between Wanaka-local Ben Harrington and Wellington’s Fraser McClellan. With both skiers putting down super clean runs with technical tricks and good grabs, the podium positions would all come down to their rail scores in the afternoon. Fraser’s rail game was on point and with all of his tricks locked in, it was a smooth ride into the gold medal position.

Medallist in yesterday’s ski halfpipe competition, Abi Harrigan (Australia) stood out once again in the Junior Girls’ Ski age group, impressing the judges by spinning both ways on the jumps and landing clean. Abi also put together a solid rail run with a frontside 270, switch lip, front swap and 50 to slide, for the win. Maggie Little (Wanaka) claimed first place in the Senior Girls’ group – backing up her win in the halfpipe yesterday – with a backside 270 on the downrail the highlight of a very clean rail run. Chloe McMillan (Cambridge) had one of the smoothest rail runs of the day and was very close behind Maggie in second place.

“I’m really happy with my result,” said Maggie. “It’s good to see my training paying off. I’ve been practising my jump run and my goal was to land that. That meant I could go into the rail section with confidence and land a clean run.”

Junior rider Makayla Kellogg of the USA  stood out as one of the strongest female snowboarders of the day, with solid rail and jump tricks which would have seen her top the Senior Girls’ category. Her rails were impressive with a 50-50 180 out, half cab to 180 pretzel, switch 50-50 to backboard, front 50-50 to front board, but the jump line was what secured the gold medal with a cab 5, straight air mute tweak, back 3.

The judges had their work cut out for them deciding podium placings in the Senior Boys Snowboard age group. Lachie Blackmore secured the win by spinning multiple directions on the jumps with solid grabs and perfect landings combined with a technical rail line with a hardways 270 on the down-flat-down.

“I was pretty nervous coming into today’s competition, there was a bit more pressure with it being a World Rookie Tour event as well.,” said Lachie. “I’m really pleased with my result because it means now I can go and compete in the World Rookie Tour finals in Austria next year.”

Mitchell Davern was a close second, also spinning every rail feature and stomping his jumps. Fletcher Craig rounded out the podium in third with a solid jump run combo of cab 5, frontside 720, backside 720. 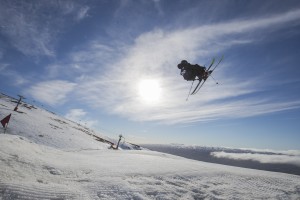