The Junior Nationals run over five days and comprise a variety of disciplines from racing through to park and pipe, and freeride. Competitors have travelled from throughout New Zealand and from Australia to take part in this long running event which has for many years showcased the talents of young snow sports athletes. For many it is a chance to try their hand competing for the first time, for others it is a chance to hone their skills and provides a stepping stone to the international stage.

In the Salomon Boarder-cross racers first completed a single time trial on the Speed Zone Gravity-cross track. The fastest racers in each age category then moved through to elimination rounds before racing head to head for final positions.

Competitors across several age groups were able to claim medals in both of today’s snowboard disciplines, putting themselves in a strong position for the overall titles which will be decided when competition finishes on Friday.

The male and female Year 11-13 age groups had the largest numbers of competitors with racers from Auckland and Australia dominating the podium. Phoebe Crawford (Auckland) was fastest on course in both the Boarder-cross and Dual Giant Slalom. Mitchell Davern (Auckland) won the boys’ Boarder cross and Henry Baff (Australia) the Dual Giant Slalom. Queenstown local and long-time Junior Nationals competitor Ryusei Wakushima will be challenging hard for the national title after claiming two third places today.

The Tulips run in Captains Basin provided the stage for a hotly contested freeride competition with judges rewarding skiers for well-controlled, fluid runs top to bottom of the course.

The Primary 5-6 age group – one of the largest categories – showed impressive style and the judges liked their creative use of the course. Amy Benson earned top marks in the girls’ field skiing a purposeful line right down the fall line, with well-linked airs through the course. Finley Melville-Ives stomped the first backflip of the day for the win in the boy’s field, adding to the family medal collection with his snowboarding brother Campbell also earning a silver medal in Giant Slalom and gold in Boarder-cross.

The first age group to start from the very top of the run and with more terrain to play with, the Year 7-8 group took the level up a notch. Gustav Legnavsky was the standout in this group showing absolutely no hesitation as he flew through the course making grabs on every air.

Year 9-10 boys pushed the bar with backflips, big air and bold line choices. Luca Harrington hit the 90s mark with a high-speed run, heading straight for the exposed ‘Box Office’ feature with good air out and a stomped 360 to finish. Connor Harding was only a few points behind, skiing aggressively through exposed terrain and linking a triple.  Charlotte Muir was the top scorer in the girls’ Year 7-8 group.

Australian skier Abi Harrigan was the first girl to land a 360, putting the full stop on a well-controlled and technical run and was just pipped for the top spot by local girl Zoe Smith who took a fast, aggressive run straight down the fall line and in to first place in Year 9-10 girls.

“I was feeling really confident about my line and I focused on going fast and keeping it under control, hitting just a few features well rather than trying to do everything,” explained Zoe.

Ben Harrington’s unique run started out with a side air shifty turn at the top of the course and continued with a stomped air off the nose of the ‘Hourglass’ feature, earning him first place in the senior boys’ age group.

“I’m really happy to land my run and it’s definitely a highlight to see my brother Luca on the podium in his age group as well,” said Ben.

Bella Thomsson won the senior girls’ category, skiing the entire course with confidence, taking large airs, landing well and polishing the day off with a 360 off her final feature. 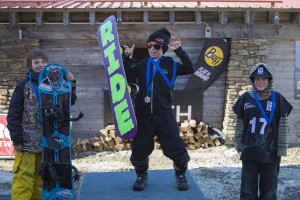