Lake Wanaka, NZ – (2 October 2013) – New Zealand’s young skiers and snowboarders proved themselves a hardy bunch in the face of challenging weather conditions on day three of competition at the Snow Sports NZ 2013 Freeski & Snowboard Junior Nationals today. While the skiers competed in the halfpipe, the snowboarders took on the big mountain event. If it was windy and raining the competitors – aged between three and eighteen years – either didn’t notice or didn’t seem to mind and still enjoyed an “awesome” day.

The Olympic Super-Pipe – which has been the training ground for several Olympic medallists – provided the competition venue for today’s Salomon Ski Halfpipe. Competitors as young as five pushed their skiing to the limit in the pipe which measures 22ft high, 21m wide and 160m long.

Competitors had two attempts to impress the judges with their tricks and the better of two runs counted as their overall score.

The sheer size of the pipe was a challenge for the youngest competitors but Riley Jackson (Ruggies boys), Nate Teen (Grommet girls) and Luca Harrington (Grommet boys) were awarded top prizes in their age groups for displaying good control and amplitude. Luca Harrington also scored highly for his switch entry and for including a variety of grabs in his run. There were no female competitors in Ruggies girls.

In the Ripper age group Kirsten Blackley backed up yesterday’s win in slopestyle with the top score for her halfpipe run which displayed solid technique. Jasper Bloomfield came out on top with his run which included two 540s back to back and an alley-oop 3 before riding out of the pipe switch.

Fiona Murray pulled a 360 halfway down her run and finished with a 540 to win Shredder girls. Shredder boy, Nico Porteous had one of the best runs of the day, described as “off the hook” by judges. His trick list started with a left 900 to right 360, switch 360, flair, right 540, alley-oop, finishing with a flat 540.

“I tried my best,” explained Nico. “I’ve been practising my run for two weeks and I’ve landed it many times but you never know what’s going to happen in competition.”

The Youth girls were commended for strong technique; Olivia Jones emerged as the winner of the category. Competition was tight amongst Youth boys with Finn Bilous putting down the winning run including right 900, alley-oop flat 5, flair tail, left 540, right 720, switch right 540.

Beau-James Wells was looking good for the winning run in the Juniors’ age group until a crash right on the last hit of his second run put him out of contention for first place, causing the upset of the day.

Philosophical about his day, Beau declared “I was happy that my first run held up” and “stoked to get on the podium.”

Alec Savery was the deserved winner of the category, his run the cleanest of all and featuring a left 9 tail, right 5, left 5, alley-oop flat 5 and flair, grabbing all the way down the pipe.

Click here for results from the Salomon Ski Halfpipe

The K2 Snowboard Free-ride big mountain competition took place on the Tullips run on the lower left side of Captain’s basin. With the Captain’s chairlift having to be closed due to the high winds and access to the top of the course therefore restricted, competitors had only one chance to complete their best run.

In addition to the wind, snow conditions were difficult with a hard crust on top and soft snow underneath. Head Judge, Mike Hygemann, was keen to stress to competitors that “today was not an extreme day.” As the competition name suggested, the emphasis was on the “free-ride” and snowboarders were to be judged on fluidity, control and line.

Youth boy Matthew Cox was the stand-out performer of the day. In the process of claiming his fourth win of the 2013 Junior Nationals he also earned the highest score across all age groups.

Judges were pleased to see the youngest riders showing good control on the steep course. Amarnie Barber and Rocco Jamieson were the winners in Ruggies with Charlotte Lyell and Zephyr Lovelock topping the podium in Grommets. Ripper girl Cool Wakushima posted a high score thanks to her big rock drops and 180 at the end of the run. First-placed Ripper boy, Mitchell Davern, kept himself busy with four ollies, a tail grab and 180 to cab.

Kristal Roberts chose a different line to the other girls and was awarded top prize in Junior girls for what judges described as a “clean, aggressive and controlled run.” Freeman Andrews was the winner of Junior boys with a solid start, big switch into cab, two big ollies in a row and a stale fish.

Click here for results from the K2 Snowboard Free-ride

Competition continues until Friday with the following events: 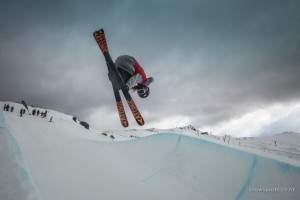