Jumps and rails were the focus on day four of the 2018 Snow Sports NZ Junior Freestyle Nationals at Cardrona Alpine Resort today. The Smith Ski and Snowboard Slopestyle competition saw younger competitors in the Lil Bucks Park while the older girls (U14-U18) and U12 boys competed on the Antlers Alley jumps and Stag Lane rails. The U14-U18 boys will compete tomorrow (Friday).

U18 snowboarder Cool Wakushima outclassed everyone with her stylish rail run– frontside boardslide to backside boardslide switch out, half cab on to 50-50 back 3 off – before going massive on the jump line with her cab 180, back 360 and front 720, easily taking out the top score.

Mabel had a similar jump line of switch right 540, right 360, left 360 and on the rails went slide, back 270 off, left 270 on the down rail, finishing with a K-Fed off the third feature. Mabel claimed the gold medal and Ruby the silver.

Liam Richards was a standout in the boys’ U12 ski with big technical tricks on the jumps, clean grabs, perfect execution, and good flow through his rail section.

Meanwhile, the younger riders were making full use of the mini slopestyle course in Lil Bucks with some seriously impressive riding. In the U10 boys’ snowboard group, Joshua Li put together an outstanding second run, opening with a frontside 360 tail grab, and showed technical combos through the rail line, riding well above his years.

U12 girls’ Lucia Georgalli and Ava Beer impressed the judges with their confident riding and excellent board control, both spinning 180s and 360s with grabs and pulling out technical tricks on the rails. It was a close finish with Lucia just taking out the win.

In U10 boys’ ski Logan Millar scored highly for his technical riding, with perfectly executed left 360 to right 360 on the top jumps, before tricking all the rails with 270s out. Close behind Logan was Jake Riddle who landed switch 180 to 540 on the jumps, before riding switch the whole way to the rail section and spinning technical tricks on the rails.

The U12 ski girls were equally impressive. Grete-Mia Meentalo was awarded the win for strong skiing with back to back 360s on the top jumps and well-executed tricks, including front 270 out, on the rails.

The Junior Nationals conclude tomorrow with the Smith Ski and Snowboard Slopestyle U14 – U18 boys’ event, followed by the overall prizegiving at the Lake Wanaka Centre. 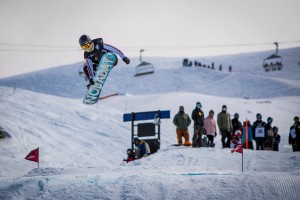