The 2018 Snow Sports NZ Junior Freestyle Nationals wrapped up in spectacular style today at Cardrona Alpine Resort with the U14-U18 boys going all out in the Smith Ski and Snowboard Slopestyle.

As well as national titles, the competitors also had the opportunity to earn FIS points and, in the snowboard division, World Rookie Tour points.

In the boys’ ski division, 14-year-old Luca Harrington took out the overall FIS event with an incredibly technical combination of rail and jump line. His rail tricks included an alley oop 540 on the Frank the Tank feature at the top of the rail course and a switch 270 on to pretzel 630 out. His jump line consisted of a right cork 9 tail on the tiny first jump to a switch left 7 japan to switch right 7 safety combo.

The skiers in all age divisions where absolutely throwing down. There was an incredibly tight decision between Ben Barclay and Ben Harrington for second and third in the overall contest, with just 0.17 separating their final scores, and the nod being given to Ben Barclay. The level was so high and the decisions were tough, especially due to the split nature of the event being divided between the rails and the jumps.

On the snowboard side, and in a similar situation to the skiers, it was U14 competitor Zephyr Lovelock who took out the overall FIS win, to add to Wednesday’s halfpipe victory.

Zephyr’s runs consisted of a front lip to switch on frank the tank, cab 270 on the down rail to front one cab one off, and then  a huge front 7 to back 9 to switch back 7 on his jump run. 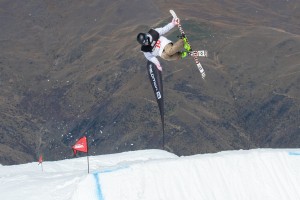