Last weekend (27 July 2013), more than 350 junior ski racers took to the slopes of Coronet Peak in the South Island and Mt Ruapehu, Turoa in the North for Junior Interfield GS races. The events were part of the Interfield Southern Lakes series and Interfield North Island series for competitors in the U10 to U18 categories.

The Turoa event was the second in the North Island series. The first event, run by the Northern Snow Circus, took place at the Snowplanet in Auckland in June and also attracted a strong field of racers. Coronet Peak was the first event in the Southern Lakes series with Treble Cone, Cardrona Alpine Resort and the Remarkables also on the schedule.

Although the Junior Interfield events have been taking place for several years, last weekend’s events attracted the highest number of competitors to date. “This bodes very well for the sport as a whole,” says Snow Sports NZ’s Ian Mclean, “and particularly since many of the competitors are just starting out in the sport.”

“We saw some really fantastic performances,” says McLean who attended the Coronet Peak event. “Some of the racers were posting excellent times but we were also looking at their technique and were pleased to see some truly world class skiing and some exciting talent out there.”

McLean was also quick to praise race organisers, local clubs and volunteers who play an important role in growing and supporting the sport at grassroots level. A joint training arrangement between the recently formed Northern Snow Circus and the Ruapehu Snow Sports club as well as a new organising committee are largely responsible for generating new and unprecedented levels of interest in alpine ski racing in the North Island, says McLean. “We can expect to see rapid growth in our sport from now on,” he says.

Rivey Mutton (U12), Sam Hadley (U12), Alice Robinson (U14), Ben Ellis (U14), Tully Robinson (U16) and Oscar Halliwell (U16) were just some the South Island-based skiers whose performances he particularly enjoyed watching.

Snow Sports NZ Alpine Sport Committee member, Adrian Farnsworth, was at Mt Ruapehu for the Interfield North Island event and was equally enthused by the number of competitors and level of their talent.

“What a day! Ruapehu Alpine lift (RAL) turned it on for us with a perfectly groomed and closed slope just for the event. RAL even went beyond the call of duty and cut a new track from the Jumbo T, towards the express six-seater, to give the racers quicker access. Fantastic! Well done RAL staff: Chris  Thrupp, Brendon Nesbit, Matt Alcock,  Jamie's crew from events and Jan's crew from the cafe.

“With a course set by Ruapehu Snow Sports’ Head Coach, Grant Stockman, and the new timing gear, purchased by the North Island Primary Schools Race Trust, which was perfectly house in a cat supplied by RAL, we were right bang on time for a 10.30am start.

“With 120 racers including 12 snowboarders and a junior team from Japan, snow sports was the winner at Turoa!  With happy racers, grinning supporters, perfect weather, fantastic support from the mountain, an enthusiastic crew from Ruapehu Snow Sports and helpers, plus our photographer Liz Brooker, it will only result in this event at Turoa multiplying in numbers. Bring it on!” 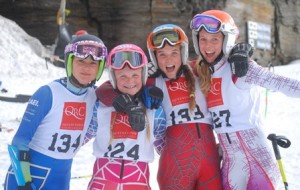