Opening day at the 2018 Snow Sports NZ Junior Freestyle Nationals saw competitors in Under-8 through Under-18 age categories enjoying the Smith Skier Cross and Salomon Snowboard Freeride at Cardrona Alpine Resort. Running for close to a decade, the Junior Nationals is a fun competition to close out the season and this year’s event has attracted some of the largest fields ever seen.

The snowboard competitors were challenged by sticky snow conditions on the freeride course in Tulips so a fall line approach for maximum speed was the way to go. U14 rider Campbell Melville-Ives (Wanaka) took the conditions in his stride, riding one of the most technical lines of the day opting for the steep coulour at the top of the course before airing with style midway, landing with conviction and riding the bottom half of the course switch.

Lucia Georgalli (Wanaka) was another standout competitor, nailing the top score in the U12 girls’ category by maintaining good flow throughout her run while incorporating small airs and putting down solid landings. There was a tight race for first place between U18 girls Cool Wakushima (Queenstown) and Caycee Stratten (Australia), both opting for a gnarly and very similar line. Cool attacked hard but lost a little control through the exposed cliffs, came out switch and did well to hold on, while Caycee maintained more control and the exact line she wanted, and was awarded first place.

In U16 boys, Oto Higuchi (Queenstown) and Zac Baikie (Twizel) challenged hard for the win, Zac just edging through in first place with a more flowing and higher consequence line, including a big drop. Biggest drop of the day, along with a massive front 360, was landed by Australia’s Ocean Roberts giving him a well-deserved win in the U18 category.

Meanwhile, over on the gravity cross course, the skiers were also battling hard for their podium spots. Each racer took an individual timed run through the course before racing head to head in heats of four. The course was running slow in the sticky snow conditions so, once again, a fast start out of the gate and a good line choice were key to the win.

Results came down to fractions of seconds and plenty of on course to-ing and fro-ing before the medal winners were decided. In the U12 boys’ seeding rounds, 0.01s separated Kazuma Saka (Wanaka) and Joe Cookson (Darfield) and in the final round, it was Saka who crossed the line first. 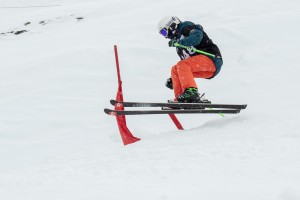