Lake Wanaka, New Zealand (28 August 2014) – The 10th edition of The North Face® Freeski Open of New Zealand got underway today with qualifying rounds of the men’s slopestyle. A 35-strong field of NZ and international competitors were treated to calm, sunny conditions at Cardrona Alpine Resort, the official resort partner of the New Zealand Park and Pipe team. Watch the action below.

Competitors were split into two heats and completed two-run qualifying rounds with the top four scorers from each heat plus the next four highest scores overall making the cut for tomorrow’s final. NZ’s Jossi Wells was the top qualifier in heat one and the UK’s James ‘Woodsy’ Woods top qualifier in heat two.

The slopestyle course, which competitors and judges have declared one of the biggest and best the event has ever seen, consisted of three rails at the top and three jumps at the bottom. The multiple rail options gave riders plenty of opportunity to show technical and creative flair.

Jossi Wells put down a clean first run demonstrating impressive technique on the rail features and finishing off with a stylish switch left side double cork 10 on the final jump for a score of 82.0 to put him in the lead in heat one. His second run was better still, earning him a score of 83.7 to assure him of his place in the finals.

However, another Wanaka local, Hamish McDougall came in hot on Jossi’s heels with a second run score of 83.00 for second place in the heat and the promise of a hard fought battle for tomorrow’s finals.

“There was only one job to do today and that was to put down clean runs and qualify for finals. I did what I needed to do today; tomorrow I’ll take it up a notch,” commented Jossi.

Eddie Gidea (USA) scored 76.3 in heat one for the third qualifying spot with Jonas Hunziker (SWI) taking the fourth spot with a score of 74.3. NZ’s Beau-James Wells came unstuck on the top rail in his first run but cleaned things up in the second to score 68.3 and finish the heat in fifth place. It wasn’t enough to qualify straight through to finals and he would have to wait for heat two’s scores to be tallied to see if he had still made it through in the top 12.

The second heat got underway with some heavy hitters in the mix, notably the UK’s James Woods who placed fifth in slopestyle at the Olympic Winter Games earlier this year.

Starting his first competition of the season, Woodsy admitted later to some first run nerves. If they were there, only he knew about it, the UK rider looking sharp on the rails and stomping the three jumps for a score of 86.7, the highest of the day.

“I’m really happy with how things went today,” enthused Woodsy. “This is such a good course and I just love it here (in New Zealand). There’s such a friendly vibe to the competition and the weather just made the day.”

14-year-old Finn Bilous, another local skier from Wanaka, was a surprise performer, pulling out a score of 82.0 with his first run, high enough to take him through to finals third in his heat and fifth overall.

Fourth place from heat two went to Carson LeHouillier (USA) with a score of 77.3.

Competition continues at Cardrona Alpine Resort tomorrow with the men’s and women’s slopestyle finals. With a much smaller female field, the women will skip straight through to the finals stage.

The Freeski Open of NZ is the only event in the world to hold Slopestyle, Halfpipe and Big Mountain in one. The Halfpipe is scheduled to take place at Cardrona on Saturday. The Big Mountain competition will take place on the first two suitable weather days between 1-8 September. The Remarkables ski field in Queenstown is scheduled to host the qualifying rounds and Treble Cone in Wanaka to host the finals; however venues are subject to change according to snow and weather conditions.

The provisional schedule for The North Face® Freeski Open of New Zealand is as follows:

Late registration for the Big Mountain will be available, also subject to competitor numbers, on Sunday 31 August at the rider briefing at Gin & Raspberry. Competitors must be registered with FWT. 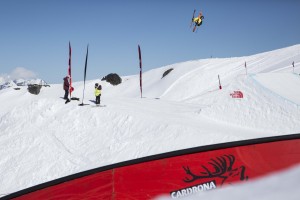 8 years ago
The North Face® Freeski Open of New Zealand