“I’m feeling pretty stoked about the result!” said Hotter. “I was up against some amazing riders over here so I’m happy to sneak on top. With the interesting snow conditions on this face, I decided to take a line that had obvious take-offs and landings. I was really happy to stomp my main cliffs and ski relatively fast.”

Classified as a four-star event- the highest ranking on the qualifier tour - the competition in Silvretta Montafon was an opportunity for up and coming riders to earn points towards a qualifying spot on the 2020 Freeride World Tour.

Both with wins already under their belts from the first event of the season – The North Face Frontier 4* held as part of the Audi quattro Winter Games NZ in August – Hotter and Marshall are currently the top ranked female and male skiers in the Europe Oceania region. Earning a spot on the FWT will require strong results at the two remaining competitions, in Nendaz, Switzerland in March and Obergurgl, Austria in April.

For now, Hotter says she is focused on skiing well and scoring maximum points across the judged elements of freeride: line, fluidity, control, air and style, and technique.

“My main goal for this season is to get better at visual inspections and reading the mountain. I’m also wanting to work on fast skiing with no hesitations and more tricks. If I make it on to the Freeride World Tour next season, then that would be the icing on the cake.” 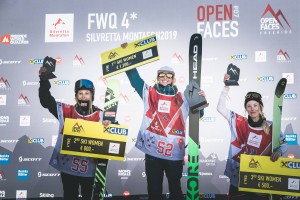