Jess Hotter (28, Ohakune) has made history tonight winning the overall Freeride World Tour title in the Women’s Ski category. This is the first time any Kiwi has claimed the overall title since record keeping began in 2008.

An emotional Hotter said “I don’t really have any words”. At the finish line of the final event tonight she explained how she was finding it tricky from the get go and struggling to line up the features. “I am just happy that I am down and walking and I am pretty stoked to take the overall”.

The final event, the Xtreme Verbier, was held on the Bec Des Ross face in Verbier, a hugely steep and intimidating venue. Hotter went into the event as the current Women’s Ski category leader, dropping in wearing the yellow bib.

Hotter struggled in the variable snow conditions on the Bec Des Ross tonight, coming unstuck on her first large air, losing both her skis and tomahawking down the face. She was quick to get back to her feet, the commentators and crowd were audibly relieved to see that Hotter was ok.

Despite crashing and receiving a ‘no score’ due to losing her skis, her previous results on the Tour this season means she still secured the overall champion title by 2500 points.

Fellow Kiwi Craig Murray was back in the bib tonight after missing the previous stop in Fieberbrunn, Austria due to a sternum injury. He was looking strong, putting together a huge run but coming unstuck on a massive flat three.

Hotter will now look forward to celebrating her success with friends abroad and then with her family back in Ohakune in the coming weeks. 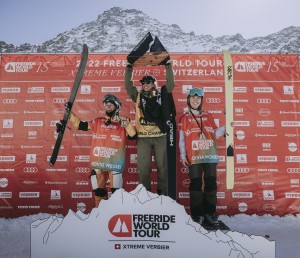