Kiwi freeride athlete Jess Hotter (Ohakune, 28) has claimed second place this morning at the third stop of the 2022 Freeride World Tour held in BC, Canada.

She followed up her victory in Ordino Arcalís with another solid result, taking second place with a characteristically hard-charging run.

115km/h winds affected the mountains around Kicking Horse Golden, B.C. two days before the event and the planned venue, Ozone, bore the brunt of the wind and was left in poor condition.

Following consultation between the riders, guides and organizers, the decision was made to change venues to T1 South. The conditions on the new venue were challenging, but with dry conditions across much of North America, it was still a huge victory to complete another successful event.

As the intense action of the competition concluded, riders experienced some of the most emotional moments of the season, with the new overall ranking determining ‘The Cut’.

The top 25 riders (11 ski men, 6 ski women, 5 snowboard men, 3 snowboard women) are now qualified to the FWT Finals, while those who placed below the qualification line were relegated to the FWQ Finals.

Jess Hotter, as the top ranked athlete in the ski women category, has cruised through to the finals. She will be joined by fellow kiwi ski men Craig Murray and Jamesa Hampton who placed 16th and 10th in today’s event.

Rankings (with the cut) 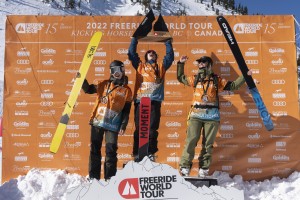