“It feels great to win,” she said. “This is the first competition before the Northern Hemisphere season starts up so it’s awesome to put some runs down. Everyone’s killing it and putting down some solid runs.

“I added in an alley-oop flat 5 which is a new one for me so I was glad to get it in the competition atmosphere. Thankfully, I landed my first run since I fell on my second and third so I’m glad that worked out!”

It was a close contest for second and third, but Janina kept rival Ayana Onozuka of Japan at bay to take second with 78.20 to Onozuka’s 74.40.

Janina appreciated her local support. “It feels awesome to be second on my home mountain in front of my hometown crowd. I couldn’t be more proud. Everyone came out to cheer me on and my family’s here so I’m stoked.

“I’m stoked for the other girls on the podium too. We’re all trying to step it up and put down new runs. Some worked and some didn’t but I think that the top three girls ended up on the podium.”

In the men's event jubilant French skiers made sporting history with Kevin Rolland, Thomas Krief and Benoit Valentin achieving a clean one, two, three for France in the Wells Olympic Pipe at Cardrona Alpine Resort - the first time French skiers have taken the entire podium for a FIS World Cup halfpipe.

Top qualifier Rolland kept up the pressure with a classy first run scoring 92.00, keeping him in front for the rest of the competition which is also the first Platinum-level event of the season on the AFP World Tour.

Second-placed qualifier Krief vied with Valentin for the next two places, only decided by a gutsy last run scoring 90.40, just pushing Valentin into third with 89.20.

For Rolland, it was a dream come true. “It couldn’t have worked out better for us. A French podium was a goal but we tried not to focus too much on it. I stomped my first run, which is pretty rare. Normally I have a hard time dealing with the pressure, so landing it was definitely a confidence boost. From there, I was able to alter my runs according to the competition. We couldn’t be happier to land the one, two, three.”

The only Kiwi in the finals, Beau-James Wells, was one place ahead of Krief in the qualifiers and was always going to be a threat on his home snow.

His all-or-nothing attitude in attempting one of the halfpipe’s most difficult tricks — the unnatural rightside double cork 1260 — was a valiant effort to get into real contention and disrupt the French connection.

But today wasn’t his day, and three falls put him out of the running.

American Broby Leeds and the rest of the field pushed hard, but flat light contributed to several slips and some heavy falls, leaving the podium clear for the French, who had a well deserved win, according to head judge Lao Chazelas.

“There’s a pretty clear distinction between the podium three and the rest of the roster. Everyone outside the French team fell on their runs so that definitely played a role, but their runs were really well executed with good amplitude. We would have loved to see Beau and Lyman [Currier] land their runs since they were going so hard. 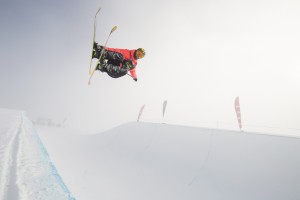