Copper Mountain, USA (18 December 2014) - Cardrona NZ freeskiers Janina Kuzma and Beau-James Wells, both of Wanaka, have earned podium finishes in the halfpipe at the U.S. Revolution Tour at Colorado’s Copper Mountain Resort in the U.S.A today. Janina finished in second place and Beau-James in third place.

New Zealand is well represented in the disciplines of freeski and snowboard halfpipe and slopestyle at the four-day competition which began on Tuesday (US time). The Kiwi contingent includes Olympians as well as up and coming athletes gaining some of their first international competition amongst a field of over 400 freeskiers and snowboarders.

The Rev Tour is sanctioned by the International Ski Federation (FIS) and is a World Snowboard Tour National Level event as well as an Association of Freeskiing Professionals (AFP) Silver level event. The Tour started in 2003 to bridge the gap from grassroots competition to the elite level.

Since beginning her northern hemisphere season earlier this month, Janina has earned a string of top level results including a World Cup win and fourth place at The Dew Tour against the world’s best female freeski competitors. She finished in second place today behind the USA’s Annalisa Drew. Anais Caradeux of France placed third.

Janina earned her top score with her first of two finals runs. Her run included an alley-oop, left five, back-to-back flairs and straight air tail grab into a 720 to finish.

“Today was a good opportunity to mix things up a little and try a different series of tricks to the ones Janina landed in her World Cup winning run,” explains Tom Willmott, Head Coach of the Cardrona NZ Park and Pipe Team. “The focus now is increasing the technical difficulty of Janina’s runs to improve her scores even further.”

First-place-getter Annalisa Drew had the technical edge in today’s competition, landing the 900 which Janina had been able to put down at the World Cup but which didn’t feature in her runs at the Rev Tour.

Beau-James Wells found the form he has lacked in the opening events of the season and brought home a third place finish in the halfpipe. In his first run of the finals competition he was able to land back to back doubles, the first time he has done so in competition in the Copper Mountain halfpipe.  Beau’s second run saw him land the switch 900 on his last hit which was enough to increase his score but, thanks to a slight hand drag, not enough to take the win. U.S.A skiers Kyle Smaine and Colby Stevenson placed first and second respectively.

Other results for New Zealanders competing at the Rev Tour this week include:

The Rev Tour concludes tomorrow with the freeski slopestyle which will see Beau-James Wells, Jackson Wells, Finn Bilous and Miguel Porteous back in action. 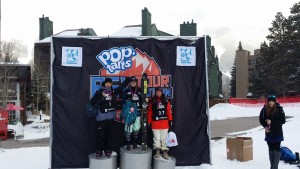