It was a tremendous display of skiing under the lights in Tignes, France, on Friday night at the halfpipe World Cup finals, as Canadian Cassie Sharpe took an impressive win in the competition, while runner-up on the evening Ayana Onozuka (JPN) was awarded the 2014/15 halfpipe World Cup title and crystal globe.

“We knew it was going to be an exciting night and Tignes delivered,” explains Snow Sports NZ Head Park & Pipe coach Tom Willmott. “Perfect weather, perfect pipe and some of the best pipe skiing ever.”

Cassie Sharpe dropped in first for the women with a huge run and it was clear from that point that everyone would be going all out.

Hit after hit throughout her first run were in an amplitude zone usually reserved for some of the men in the finals, and though she found herself in second place behind Onozuka, the best would be yet to come.

In her second run Sharpe was able to best Onozuka, but it would be her third run that would earn her the biggest score of the evening, as she took every trick in her run to the moon, with an exclamation point second-to-last hit left side flare that photographic evidence will show was higher than three out of six of the men were going in that zone.

Earning her a score of 93.80, it was one of the most impressive ladies' halfpipe runs probably anyone has ever seen, and it will be talked about for a long time to come.

“It was the biggest, craziest, best run I've ever done in my life,” Sharpe said just before awards. “It's taken a lot of hard work to get it there, and I'm super stoked on it. This is my first really big win. It's been a lot of dedication, a lot of hard work, a lot of help from my coaches. But this feels amazing. It's surreal.”

Onozuka, with her unmatched technical riding, would hold on to second place with her first run score of 90.40, while Brita Sigourney (USA) would earn some redemption after a disappointing turn at the last World Cup in Park City, USA, nailing a solid final run to earn herself a score of 86.40 and third place.

NZ’s Janina Kuzma was fired up and found a personal best height of 11 feet on the first hit of her first run, but ultimately couldn't hold the run together.  While the plan was to get one run down and then to introduce the 900 in to the combination it was not to be and each of her runs had some errors.

Ayana Onazuka clinched the World Cup globe finishing ahead of Janina and in second at this event behind Sharpe.

Having not landed the run she was capable of, Janina was disappointed with her performance on the night but pleased with her season overall. She is looking forward to getting back into training to learn some new moves and preparing to come back with more in the bag for her next event which will be on home ground at Winter Games NZ at Cardrona Alpine Resort in August. 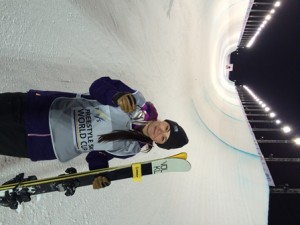