The invitation-only event saw 16 of the world's best female halfpipe riders contest the semi final rounds on Thursday (NZT) and Janina make the top six cut off for finals.

Pleased with the technical side of her qualifying run but knowing that she would need to tidy up her grabs and increase amplitude to earn a high score, Janina took an aggressive approach to today's two-run final. Attacking the first run with an alley-oop straight air on the first hit, Janina found the amplitude she needed and nailed the first run for a score of 80.40.

Canada's Cassie Sharpe came through with a strong first run and a score of 86.40, briefly holding the lead until Japan's Ayana Onozuka was able to supplant her with a well executed run and claim the top spot with 89.40.

Ayana's run was enough to keep her in the lead after the first set of runs, leaving her as the one to beat. Cassie Sharpe landed back-to-back 540s and back-to-back flairs and was able to improve her run enough to knock her score up a bit, but still sat second behind Ayana. After a fall on her first run, Brita Sigourney came through on her second run, keeping up good height throughout the run and landing some solid tricks that included a left 900 safety. The run moved Brita up into podium position ahead of Janina Kuzma.

Looking to lift her score Janina opted for the step up run, pushing for the 720 on the second hit but didn't find the landing and her first run score would be her best of the day.

Top qualifier Annalisa Drew also had a chance to dethrone Ayana but lost speed near the top on her final run, keeping Ayana, Cassie and Brita on the podium and Janina in fourth place.

While just off the podium, Janina was pleased with her solid performance at the first competition of the season.

"I'm really happy, it's good to brush off the cobwebs and get the first competition underway," said Janina. "I was stoked that my first run went well, I got the grabs in and the amplitude I wanted. I decided to go with the step up run for the second run, it makes it more exciting to mix things up. I was disappointed not to land it but still, it's a good start to the season." 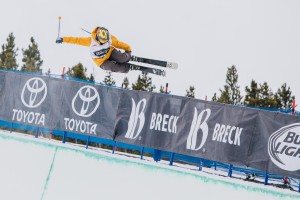