Running from the 7- 8 December, the Audi FIS Ski Cross World Cup in Nakiska, Canada was the first race on the season’s ski cross World Cup circuit. 190 of the world’s top-ranked skiers from 25 nations were there to compete at their best.

Despite missing out on qualifying for the World Cup finals by a close 0.07sec Prebble was, for the most part, positive about his performance:

“The race track was amazing with lots of different features over the 1.2km course. I had a blast with the training runs and was ready to attack. In the qualifying run I skied aggressively attacking the line where I could and ended up so close to making the cut, only a whisker 0.07sec short. There were a few jumps where I got more air than expected, costing valuable time.

“So it was a mixed bag of feelings; proud to have put down a competitive run and pleased to have beat some skiers who have previously won SX World Cups but frustrated at being so close to that next stage.”

This frustration will, however, be put to positive use, says Prebble: “This has left me even more hungry to put in the hard work and try to be more competitive in this sport.”

Prebble will now fly to Europe, where he will compete in the Audi World Cup in Val Thorens, France on 18 December.

In other skiing racing news, Willis Feasey (Twizel),Ben Griffin (Ohakune) and Finlay Neeson (Oakura) have experienced some highs and lows of their own, competing in the Downhill and NorAm Cup at Copper Mountain, Colorado from 5 -9 December.

Racing began well for Feasey who lowered his FIS points in day one’s downhill event, starting in 77th and finishing 55th. Unfortunately the following days’ events would not see such positive results and Feasey recorded DNFs in the downhill on days two and three.

“The course started to get pretty bumpy and difficult to ski on,” Feasey reported. “I also made a few mistakes so there is room for improvement, and as always the NorAm field is of a really high quality.”

In the men’s Super G event on 8 December Feasey started in 52 to finish in 65 while Ben Griffin recorded a DNF. Griffin put this down to “being too greedy on the line near the bottom (which) caught me out and sent me to a DNF.”

Griffin says that despite being disappointed to have recorded a DNF he is “definitely taking some good things away from it.” He reflected that “today was the first full-length, genuine, fast SG gates I have run since early September 2011. That’s almost 15 months.”

Finlay Neeson, returned to racing after injury, also competing in the men’s Super G on 8 December where he recorded a 67th place finish from a start of 102. In the final day’s Super-G event on 9 December he was able to improve his placing from starting bib of 100 to finish in 80th. 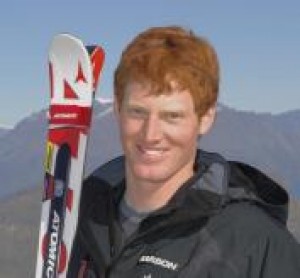