Weather again disrupted the day’s schedule leading to a late afternoon finish for the women and the cancellation of the men’s comp. However, the performance of all eight women in the final, which ended with daylight fading, was well worth the wait.

Jamie Anderson bettered her World Snowboard Tour ranking of second in winning the final and continued the form that won her a fourth X Games gold at Aspen back in January. Her first run scored 94.75 featuring a backside tail tap over the wall ride to a backside tailslide on the downrail, a 50-50 to backside 180 out on the pole jam and finishing with a switch backside 5 indy and a backside 5 mute on the kicker line.

Her second run became a victory lap after her closest competitors failed to match her score. Afterwards she said the day had been “long but really good”.

“Today has been just wonderful. I’m so thankful it worked out and that everyone was patient with the earth – it’s just a part of the journey. I just wanted to land a run and do well but I wasn’t totally obsessed with winning. All of us had to deal with the weather which was quite challenging but we all rode really well and I’m so proud of all the girls and I’m really happy with myself.”

Second placed Jenny Jones was more than seven points behind the American, even with a solid first run including a stall to fakie, switch back boardslide, 50-50 to indy out, backside 360 indy and frontside 700 indy.

She said she was “absolutely stoked” to come second: “I was pretty chuffed with my run, especially under the conditions. I mean it was foggy, it was windy and I managed to land all of my tricks. Happy days!”

Bronze medallist, Cheryl Maas said: “I'm so happy today. I got third place and I couldn't believe it, especially after being out for six months with an ACL and meniscus injury. I'm really happy – there couldn't be a better start than this.”

New Zealand’s Christy Prior also reached the final and her second run was looking good until the very last kicker when she agonisingly failed to land her final jump cleanly. Her first run score of 61.75 was enough to take seventh place overall. No other Kiwi athletes made the final with Shelly Gotlieb 22nd, Rebecca ‘Possum’ Torr 26th, Stefi Luxton 33rd and Jasmin Gallop 42nd from 46 starters.

A relieved Head Judge, Ola Sundekvist summed up a long day perfectly: “We got it!” 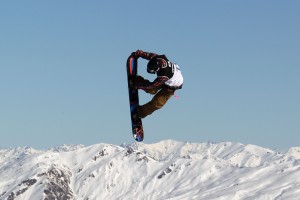