Today’s competition format saw male freeski competitors compete across two qualifying heats, with the best score from two runs counting and the top four from each heat plus the next top four progressing to a 12-man final held at the end of the day. Female skiers competed in a straight finals format with three runs to put down their top score.

Male snowboarders competed in one heat this morning with the top 12 progressing to finals, which will take place tomorrow (Wednesday). Female snowboarders will also compete in a straight finals competition tomorrow.

With intermittent cloud covering the course in the morning, most heat one competitors opted for a safety run on their first attempt, looking to step up their tricks and increase their score if the weather allowed on run two.

The UK’s James Woods, who finished fifth in freeski slopestyle at the Sochi Olympic Winter Games, led the charge in heat one. The first rider to drop, he scored an impressive 91 and was never challenged for the top spot in his qualifying heat.

NZ Youth Olympic medallist Finn Bilous scored an 82 on his first qualifying run, putting him into second place with a ticket to finals. Japan’s Tasei Yamamoto scored 77.7 for third qualifying spot. Denmark’s Thomas Trads was one of the only competitors able to up his score on his second run, taking his points from 43 to 75 for fourth in his heat and a start in the finals.

Heat two for men’s freeski got underway in the early afternoon with another heavy hitting field looking to secure a top four position and a place in the finals. In a close fought battle, all of the top four finishers were forced to step up on their second runs in order to make the grade. Eddie Gildea (USA) was the top scorer on 88 points followed by NZ’s Jackson Wells (Wanaka) on 85.7, Ryan Stevenson (USA) 83 and Kiwi Dane Kirk (Cambridge) on 82.

The men’s freeski finals was a close fought affair which would come down to the final trick by the last competitor in the field. With Woodsy and Finn Bilous both making errors in their first runs, the lead initially sat with Japanese competitor Tasei Yamamoto on 88.00.

“I was pretty scared coming in to finals, I won’t lie,” explains Finn Bilous, knowing that a podium finish would call for a personal best performance and, crucially, landing a back to back 1260 trick combination. “I haven’t done the 12 to 12 combo in competition before and it was getting hard to land late in day, with the course getting icy.”

Putting any doubt out of his mind, the young Kiwi executed a near perfect second run including the back to back 1260s as required. With a score of 94.7 the win looked to be in the bag. However, experienced competitor, James Woodsy Woods, wasn’t done for the day. Ending his run with his signature double 1260 with his unique octo grab (one hand grabbing the nose of one ski, the other hand grabbing the tail of the other ski while in the air), the score came in at 95.7 for the win.

Despite missing out on the top spot, Finn Bilous said he was still “pretty happy with the result considering who it was against. I’m stoked to be up there with Woodsy.”

Tasei Yamamoto held on to his third place spot to finish the day on the podium.

In the women’s freeski final Kelly Sildaru was unbeatable with a score of 93.00 points thanks to her incredible jump execution and solid grabs. She was feeling “really good” about the result, with her switch right nine and cork seven tricks the personal highlights of the day.

Five-time X Games medallist Sebastien Toutant (Canada) was the top scoring competitor in run one of men’s snowboard heats. But, testament to the high standard of competition, his 85.7 score was then surpassed by Norwegian athlete Marcus Kleveland with a score of 90.7 on run two. NZ youth Olympian Tiarn Collins (Queenstown) recovered from a sketched landing on his first run to take his score up to an impressive 86.3, landing him in second place in the qualifying heats. Australia’s Matthew Cox held on to 77.3 for his spot in the finals, just edging NZ’s JJ Rayward (Nelson) back into fifth on 75.7 but still safely into the top 12. 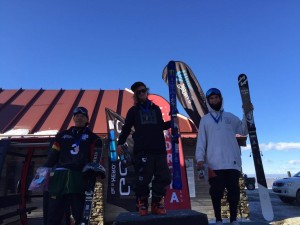