Cardrona, New Zealand (5 September 2018) –  The FIS Freeski World Cup Big Air Qualifying was on the schedule at the Audi quattro Winter Games NZ today but  high winds caused delays and only heat one of the men’s field was able to compete.

With dual sanctioning as an AFP Platinum level event, and the first FIS World Cup since Freeski Big Air was announced as an Olympic discipline for Beijing 2022, the start lists are a who’s-who of the sport’s heavy-hitters, and with sixteen starters and only five finals spots from each of the two men’s freeski heats, today was never going to be the day to hold back.

First man out of the gate, Canada’s Noah Morrison opened the bidding with a beautiful triple 1620 for a score of 89.60 on run one, and held on to the top spot, improving to a 93.00 on run two.

Andri Ragettli (SUI) took the second qualifying spot upping his score from 88.00 to 89.00 with a triple 1440 truck driver, a technical grab to hold through a triple.

Canada’s Teal Harle landed in third place with a technical and progressive rotation and double grab, a switch double 1440 safety to stalefish.

While 2018 Junior World Slopestyle Champion Oliwer Magnusson (SWE) was on strong form, landing an immaculate double 1440 tailgrab that was held right to the very end of the trick, putting him in to fourth place.

New Zealand’s Jackson Wells stomped his unique switch double misty 1260 double seatbelt safety grab on both runs and nailed down the fifth and final qualifying spot in a tightly fought race for the bubble.

Men's Freeski Heat Two and Women's Freeski Qualifiers have been postponed until later in the week. 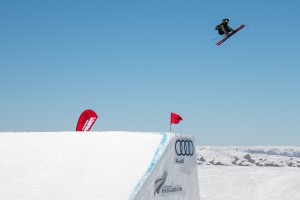