Competition format was a straight three run final with the best run counting as an athlete’s final score. Skiers and snowboarders dropped in to the course alternatively and were judged by two separate panels, a format which competitors and judges both enjoyed and which led to a faster flowing competition.

First and second place in men’s snowboard was a close call but Freeman Andrews (Tauranga) nailed the win with impressive amplitude and clean execution of tricks, coming in right off the bat with a huge cab 720 with a mute grab as his first trick of his first run.

“I’ve had a late start to the season and today was only my fourth day back,” explained Freeman. “I was hoping for a podium but I wasn’t really expecting it. I went big on my first hit so I was pleased with that but I was disappointed not to get any 900s into my runs.”

Tiarn Collins (Queenstown) finished second off the back of his win in yesterday’s slopestyle. His first run also included a good variety of tricks but lacked the amplitude of Freeman’s winning run. Fletcher Craig (Te Awamutu) finished third in today’s halfpipe, having just missed the podium in the slopestyle and finishing fourth yesterday.

The women’s snowboard podium had an international flavour with Australia’s Emily Arthur first, USA’s Julianne O’Neill second and Finland’s Anni Halonen third. Once again, greater amplitude and superior execution of tricks made the difference in the podium placings.

“I thought all the girls rode really well and I’m really stoked to win today,” commented Emily who is training in New Zealand in preparation for next month’s Audi quattro Winter Games NZ world cup.

Cardrona NZ skier and Olympian Beau-James Wells (Wanaka) looked to be the obvious pick to win the men’s freeski halfpipe, starting his first run with a high score of 78.50. However, 13 year old Nico Porteous (Christchurch) wasn’t going to let him away with it too easily, also coming out strong and posting a first run score of 77.50.

Knowing that he needed to “go bigger and get the grabs” in order to improve his score, Nico did just that and finished off with an alley oop flat five for a score of 79 putting him ahead of Beau-James Wells after the second run.

“I knew I had three runs (to get the top score) but I was still a bit nervous at that point,” admitted Beau after the comp. “I decided I had to bump my last trick up to a switch 7 instead of the switch 5 I’d done in the first two runs.”

Showing his experience, Beau tightened up his final run and upped the amplitude, coming through with a score of 84.75 for the win. Nico Porteous finished second, pleased to step on to the podium and improve on his fourth place finish from yesterday’s slopestyle. Finn Bilous (Wanaka) matched his third place slopestyle finish with third place in the halfpipe after a solid day of competition, also saving is best for last and posting his top score of 77.25 on the third run.

The women’s freeski halfpipe saw US athlete Keri Herman back at the top of the scoreboard, backing up yesterday’s win in the slopestyle.

Isabelle Hanssen of The Netherlands finished in second with Brittany Hawes (Wanaka) third.

Several NZ athletes have experienced FIS level competition for the first time this weekend and may now look to compete at the World Cup events being staged as part of next month’s Audi quattro Winter Games NZ.

These Continental Cup events are supported by the Winter Games NZ Leverage and Legacy Programme which alongside Snow Sports NZ and Sport NZ aims to grow participation and achievement in snow sports. 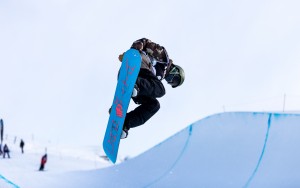