Today’s competition is sanctioned as a two-star level event on the Freeride World Qualifier Tour. The tour is designed to develop the talent and skills of up-and-coming freeride athletes whose ultimate goal is to qualify for the prestigious Freeride World Tour. The score system is based on the star ranking of the qualifying events (one-four stars).

Competitors had only one run to impress the judges and were judged on air and style, fluidity, technique, line and control. Eighteen-year-old German skier Konstantin Ottner was the first competitor to drop into the steep, technical terrain. Although pre-qualified for the four-star competition so with no pressure to earn a top three placing today, he still decided to set the bar high by laying down two big back flips.

“There was no pressure so I was just having fun and taking it easy,” he explained.

“The standard of this competition just gets higher and higher every year,” commented head judge Dion Newport. “Konsti set the bar but people know how to high jump at this competition and others had even bigger lines.”

2016 Freeride Junior Tour Champion, Craig Murray (Wanaka), also pre-qualified for the four-star event, was another competitor with no thoughts about holding back in today’s competition. He started his run with a 720 (two full rotations in the air) on the wind lip at the top of the course and then put together a fast and fluid run right to the bottom of the course for the day’s top score of 94.67.

“Craig put together an impressive performance today and it showed he’s hungry to break through to the Freeride World Tour,” said Newport.

Over the course of its 12-year history The North Face Freeski Open of NZ, as The North Face® Frontier was previously known, has acted as a stepping stone for several Kiwi riders to qualify for the World Tour including Sam Smoothy, Charlie Lyons, Sam Lee and Janina Kuzma.

Kiwi Andrew Wylie, competing for the third time this year, put his ski racing background to good use and proved that he knows how to arc a ski. He finished in second place with a score of 90.67. He came in at the top of the course with blind giant double drop and showed good form over the roller, finishing off with a double stage drop at the bottom of the course.

Nick Pascoe (NZ) scored good points with the same double at the top and a nice air over the wind lip for a score of 88.00 and third place. With their top scores, Wylie and Pascoe earned their places on the four-star start list along with fourth place finisher Jack Harker (NZ).

Spain’s Laia Castellarnau-Plaza was the top performer in women’s ski, topping the scoreboard on 80.00 points. Starting on the skier’s left of course she maintained fluidity, biting off small features at the top, picked out a rock feature at the bottom, hit it with a bit of pace and stomped the landing.

“It’s nice to be competing today and to prepare mentally for the four-star competition, it’s always good to get into competition mode and challenge yourself,” she commented.

Norway’s Mary Birkeland picked up a second place finish with a solid performance and a score of 75.33 and Birgit Ertl finished third on 70.33.

The women’s ski competition saw a surprise entry from American athlete Jamie Crane-Mauzy. The American slopestyle specialist and X Games competitor made history in 2013 as the first woman to compete a double flip in a slopestyle competition. In 2015 she suffered a major head injury while competing at the AFP World Finals in Canada and wasn’t expected to ski again. Thankfully, she has made a full recovery and was recently cleared to compete again. Although she has never competed in a freeride big mountain event before Crane-Mauzy decided to sign up for The North Face Frontier just three days ago.

“It felt right and I was so excited, no one knows I’m doing the event, my mum doesn’t even know I’m doing it,” she enthused. “This feels so good; it feels even better than competing at the X Games!”

Although choosing to keep her feet on the ground and not jump off any of the large rock features on course, Crane Mauzy’s performance was still impressive to see and was met by enthusiastic cheering from the crowd at the finish line.

The men’s snowboard division saw another Kiwi top the podium with Rupert Smith in first place on 80.00 after a clean run with plenty of airs and grabs. Marlo Bromley (NZ) recovered from a small mistake at the top of the course to charge his line and claim second place with 78.00 points. France’s Alexandre Alfano finished in third place with a score of 76.33.

Kiwi Genevieve King topped the women’s snowboard division with a fluid run right down the fall line landing solid airs along the way to score 79.00. The USA’s Christina Bruno put together a smooth run for second place on 70.00 with Randa Shahin (USA) rounding out the podium in third place on 60.00.

The four-star event will run on the next suitable weather day, likely to be Thursday. It will be the first time in many years that a four-star event has been included on the New Zealand calendar.

The competition day schedule is as follows:

For those who can’t make it to The Remarkables to watch, there is still plenty of opportunity to see the world’s best freeride athletes in action. The four-star competition will be broadcast on Garage Channel 77 and, thanks to sponsorship from Torpedo7 and support from Destination Queenstown, a livestream will also be available at this link: bit.ly/TNFFrontierLive 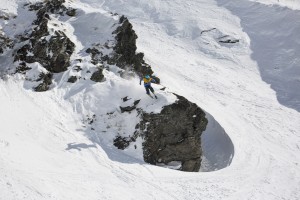