Lake Wanaka, New Zealand (2 October 2014) – The Salomon Snowboard Halfpipe and K2 Ski Freeride rounded out the final day of competition today at the Cardrona NZ Freeski & Snowboard Junior National Champs. After a run of fine weather today’s forecast was for afternoon snow showers so the pressure was on to get competition wrapped up before visibility deteriorated.

A small but determined field of Ruggies and Grommets showed off their best tricks in the International halfpipe with judges looking for good flow, control and amplitude. “We saw that and more,” commented Head Judge Mike Hygemann.

Attention then turned to the full size Olympic halfpipe for the older competitors with judges looking for good control and amplitude, controlled landings and a variety of tricks. The cooler temperature and overcast day meant that the halfpipe stayed in good condition for competition.

Heavy hitter Carlos Garcia Knight (Junior boys) added the wow factor to the day’s proceedings and earned a near perfect score for his second run. His winning run featured a method to start, front 5, back 5, crippler, tail grab and front 9.  Every trick was big and clean, just as the judges ordered.

Corrah Phillips and Kristal Roberts battled it out for first place in the Junior girls’ category, Corrah coming through for the win by showing a good variety of tricks and consistent amplitude through the pipe.

Ayla Thidling and Tiarn Collins were the top Youth performers, Ayla putting together a good combination of spins on both walls and Tiarn landing back to back 5s and keeping amplitude high.

The judges had a hard time sorting out the podium spots in the Shredder boys’ category.  Mitchell Davern stole the show with his second run landing two inverted tricks, one crippler 5 and a crippler 7. Lachlan Blackmore came through in second and Fletcher Craig third.

“I crashed my first run so I felt quite pressured for my second run,” explained Mitchell. “I went for it though and was most stoked with the crippler 7 because there was definitely a moment where I wasn’t sure if I was going to land it or not.”

Shredder girl Zoi Synott finished off her week with a win in the halfpipe after landing two clean, well-controlled runs with good rotations and grabs.

Ripper boy Zak Baikie impressed the judges with two good runs, throwing in a backflip on the second run and then going straight to a front 5 on the opposite wall. Hannah White won Ripper girls with a well-controlled run and good amplitude.

The skiers tested themselves on the freeride course on the Tulips run for their last day of competition. With snow softening and the weather just holding the skiers were each able to complete two runs.

Ruggie girl Amy Benson started the day on a strong note coming out of the gates fast and confident and nailing the win in her age group. Ruggie boys was also a hotly contested age group but it was Joe Cookson who set the highest standard and earned the gold medal.

First place in Ripper girls went to Piper Cavanagh backing up her win in the Slopestyle earlier in the week. The Ripper boys put on an outstanding display with all the competitors looking like they were on a mission to up their game. Max McDonald came away with the win.

After a less than idal start, losing her ski in her first run, Livvie Thompson came back hot out of the gates on run two, landing three airs and demonstrating excellent technique for the win.

On to Shredder boys and category winner Fraser McClellan demonstrated true fall line skiing start to finish. His run was fast and aggressive with a big 360 at bottom to finish.

Youth girls put down solid runs with good technique, Sophie Thompson the top scorer. In the Youth boys’ group Finn Bilous made full use of the terrain with five airs and a stylish 180 to take the win and his fourth podium for 2014 Junior Nationals.

But it was big brother Hank Bilous who really blitzed the day’s competition, sending two huge airs, including an enormous backflip and skiing faster than anyone else, sealing the deal with a stylish grab on his final air.

“I think that was the biggest backflip I’ve ever done,” he commented at prize giving, as though surprised by his own daring.

The week will conclude with a prize giving ceremony at the Lake Wanaka Centre, Ardmore Street, Wanaka at 3pm tomorrow, Friday 3rdOctober. Photos and footage will be shown of the Cardrona Junior Nationals event and the grand prizes will be awarded. 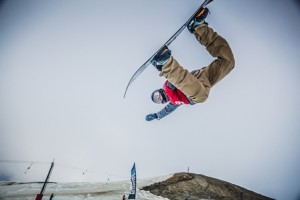