Lake Wanaka, NZ (6 October 2016) – 200 hard charging young skiers and snowboarders were in action today at Cardrona Alpine Resort for the fourth day of competition at the Cardrona NZ Freeski and Snowboard Junior Nationals. While the snowboarders were throwing down tricks in the halfpipe, the skiers were showcasing their freeride skills over in Captain’s Basin.

The Bonfire Snowboard Halfpipe competition saw primary school aged competitors competing in the International pipe and Intermediate and Secondary school competitors taking on the challenge of the 22ft Olympic halfpipe. They each had two runs to earn their top marks.

The primary 5-6 year boys’ age group made up three quarters of the field competing in the International pipe and finished with three familiar faces on the podium: Campbell Melville Ives in first, Zephyr Lovelock in second, Rocco Jamieson in third, all from Wanaka. Campbell stood out with an awesome rodeo on his first hit of his second run, followed by a front three to cab three, both with well-held grabs.

In the Olympic pipe the limelight mostly belonged to the female competitors.  Australia’s Emily Arthur dominated the 11-13 Secondary group. With huge amplitude, finesse in the air and confident smooth tricks including a front five to back five she landed herself in first place ahead of NZ’s Zoi Sadowski Synnott (Wanaka).

Female Intermediate 7-8 year competitor Alexandria Simsovits from the US could have given her male contemporaries a good run for their money, winning her age group by spinning her way down the pipe, landing frontside 360s and riding right up to the lip of the pipe and above.  In the next age group up, Cool Wakushima (Queenstown) had some of the best variation in grabs of anybody in the field and won her category with well executed, clean runs.

Olympian Juliane Bray was on the judging panel for today’s event and was excited to see the level of riding amongst the female field. “They were pushing the boys in their given age groups and showing better fundamental skills which just allowed them to ride the pipe properly, with well thought out and practised runs,” she said.

Tiarn Collins (Queenstown) was once again the top performing male competitor and put down an outstanding first run to win the 11-13 Secondary year group. Maintaining consistent amplitude all the way down the pipe he landed a huge backside air, front 5 melon, back 5, front 7 and haaken.

Fresh overnight snowfall on the Tulips course was a welcome sight for the large and enthusiastic field of competitors in the K2 Ski Freeride. Judges gave them just one run to impress and were looking for flowing, well controlled and technical runs.

Zoe Smith (Wanaka) was a standout performer in the 13-strong female Intermediate 7-8 age group. Competing in her very first freeride event she “had lots of fun and enjoyed going off the jumps and rocks.” The judges also enjoyed her run, awarding her points for skiing with confidence well above her age and putting her in the top spot.

15-year-old Bella Thomsson (Wanaka) proved what a background as a moguls competitor can bring to your skillset, winning the female 11-13 Secondary category by a clear 12 points. Opting for a “safe and controlled run with some average size drops instead of anything too big” Bella was pleased with how she’d skied. The judges were more than impressed by her fast and aggressive skiing straight out of the gate and awarded her the win.

As in past years at Junior Nationals, the year 5-6 boys’ group provided many of the day’s highlights. Australian Oskar Schulz threw done the gauntlet with his big 360 manoeuvre and the judges thought they’d seen it all. Then Finley Melville Ives opened a new tussock gap - in possibly the highest consequence move of the contest - got away with it and went straight into a backflip for first place.

Ben Harrington sent the biggest gap of the day, looked pretty wild in the air as he held on for control but did manage to stomp it and take the win in the boys’ Secondary 9-10 age group.

The male secondary year 11-13 dropped in the middle of a snow storm but it didn’t seem to dampen their enthusiasm and category winner Hamish Spreadborough (Cambridge) claimed the move of the day by hitting the same gap as Ben Harrington and adding a backflip. 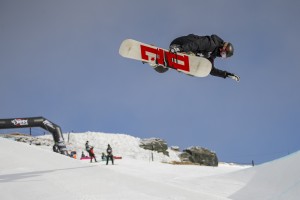