“The nerves were definitely at an all-time high leading up to the comp,” explains Bilous. “On the day I just fell in to the skiing routine and was just thinking about the skiing and how lucky I was to be in the position I was in.”

The day was not without its challenges with the Kiwi having to manage softening snow conditions as well as a very last-minute change to his line choice.

“I had a plan but I had to change it 10 seconds before I dropped in after hearing on the starter’s radio that my first landing had no snow on it,” said Bilous.

“I was third last to drop and the snow had heated up a lot and it was pretty deep slush so not getting swallowed by it was a mission. I set off a river of slough just before my last drop then just skied fast to the bottom and let out a big sigh of relief.

“It still feels very surreal but I’m stoked to have completed what I came here to do because it’s been quite the journey.”

Bilous will be one of four New Zealanders competing on the 2019 Freeride World Tour, joining Sam Lee and Craig Murray in the men’s ski division and Maria Kuzma in women’s snowboard. Anna Smoothy had an unlucky end to her qualifying campaign. Having led the women’s ski rankings all season, Smoothy crashed on the last feature of her run in Obergurgl-Hochgurgl pushing her to second place on the overall rankings, meaning she would miss out on qualifying for the Freeride World Tour.

About the Freeride World Tour

The FWT is the worldwide circuit of freeride snowboarding and skiing with the best riders in the world competing on the most legendary and challenging alpine faces and the most renowned ski resorts across the world. The FWT comprises five events and 50 competitors. The world qualification circuit is designed to develop the talent and skills of up-and-coming athletes. Riders (2700 competitors) accumulate points via 60 events held around the world (including forty in Europe). The score system is based on the star ranking of the qualifying events (1-4 stars) and the event region: region 1 (Europe, Asia, and Oceania) and region 2 (USA, Canada, Chile and Argentina). 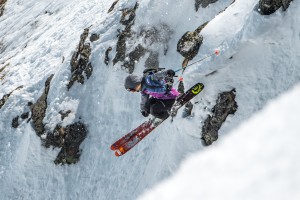