The event was held over a total of four runs; two on the first course and then a further two runs following a course re-set. The four-run format meant that racers experienced a full range of vertical combinations, hairpins and delay gates. The course was set by Brad Alwyin and race organisers were quick to praise his efforts along with the Snowplanet Team who “did a fantastic job, with the slope, course and the start.” The start was built up to be over two metres higher than the normal piste.

Oscar Halliwell (U16) was the fastest male racer, claiming the national indoor slalom title with his combined time of 1:09.72. Laura Jackson (U16) raced home in a time of 1:17.69 to become the women's champion.

In the U10 category Noah Franklin and Sophia Ullrich were top place-getters with Blake Hartley and Sophie Grenfell in U12; Theo Gilbertson and Chantelle Reilly U14; Josh Reilly in U18 and Nicole Yandall in U21. Follow links below for full results.

In future this event will be held on an annual basis in mid- to late October and will carry National Slalom points. 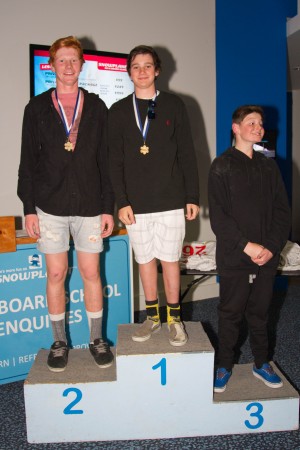