The results come as a reassuring return to form for both who skiers who struggled to put together their usual medal winning performances at World Cup races in Slovenia and Italy earlier in the month. Adam came close to the podium in his preferred discipline of Slalom with a fourth place in Kranjska Gora, Slovenia and fifth in Tarvisio, Italy but Corey was frustrated to post four DNFs in a row.

“It certainly was good to finish with three podiums in the speed races in France after a pretty average start to the World Cup season with four DNFs out of four technical races in Italy and Slovenia,” Corey commented after his final race in Tignes. “I’m feeling really confident on the longer skis and hoping to build on the momentum coming into the World Cup finals in Aspen in a few weeks.”

Corey, who is reigning World Champion in both the Super-G and Downhill disciplines, proved himself well and truly back on track, winning the final day’s Super-G two seconds clear of Austria’s Roman Rabl. Tyler Walker (USA) finished third.

Adam Hall, who specialises in the technical discipline of Slalom rather than the speed disciplines of Super-G and Downhill, described the past week as “a long and demanding one” but he was “really happy with how my week went.” Having crashed and sustained a concussion during the 2015 World Championship Downhill last March his strategy in Tignes was to “build my confidence and step up my performance each day leading into the downhill races.”

The tactics paid off and Adam finished his first Downhill race in fourth place, a mere 0.08s off third place finisher Braydon Luscombe of Canada.

“Going into the race days I felt really good and knew I had a good chance to get in the podium and knew it would be tight,” Adam explains. “Reaching speeds of about 120km and missing the podium by 8 hundredths of a second on the first race day was pretty insane.”

Taking things up a notch for the final day of racing in Tignes Adam was “was extremely satisfied and happy to finally draw a spot on the podium in both super g races.” He finished third behind Markus Salcher (AUT) and Mitchell Gourlay (AUS) in race one and Salcher and Alexei Bugaev (RUS) in race two.

Corey and Adam will travel to Aspen, USA to compete in the World Cup Finals from 24 February – 4 March. 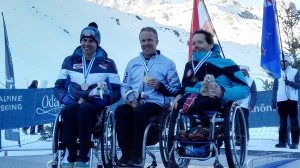