Blue skies and calm conditions eased the way for a jam-packed schedule of events on day three of the Snow Sports NZ Junior Freestyle Nationals at Cardrona Alpine Resort today. The Salomon Ski and Snowboard Halfpipe was first on the agenda followed by the U14 – U18 K2 Ski Freeride which was postponed yesterday (Tuesday).

The U14-U18 halfpipe competitors competed in the Olympic pipe while the U8-U12 competitors took their two runs in the smaller International pipe. As well as national titles, the older competitors were competing for FIS (International Ski Federation) points and, for the snowboarders, World Rookie Tour points.

There were three stand out competitors in the boys’ ski U18 group, with Chinese athletes taking out the top two placings and NZ’s Ben Harrington (Wanaka) in third. Li Songsheng took the win with strong execution and a good variety of tricks including linked back to back 900s, left 720, a switch right hit and an alley oop flat 540. Mao Bingqiang finished a very close second.

In U18 girls’ ski China’s Wu Meng and Zhang Kexin had similar runs, including left and right 540s, but Kexin lost points for a slight hand drag on her last hit and Wu came away with the win. Li Fanghui, competing in the U16 category, was the overall winner of the women’s ski.

Kiwi snowboarder Zephyr Lovelock was another standout performer, competing in the boys’ U14 category but claiming the second place overall in the FIS rankings. Zephyr’s run featured a front 720 and front 900 and he maintained good amplitude all the way down the pipe.

NZ’s Fletcher Craig was the top scorer in the snowboard field with by far the most technical run of the day, stomping a back 540, front 720, cab 540, front 900 and crippler.

There was a fun vibe over in the small pipe with the sunny conditions softening the snow and allowing competitors to show off their skills. The judges nominated U8 snowboarder Ada Silva for the “best sportsmanship” award as she stood at the bottom of the pipe cheering on her friends and clapping every competitor before taking her own runs as the very last rider to drop in.

The younger female competitors put down some very impressive runs. U12 snowboarder Lucia Georgalli made it back on the podium for the third time, so far, this week, winning gold with her alley oop hand plants and overall strong riding. U12 skier Grete-Mia Meentalo was another top performer, throwing down a 360 in to a strong switch hit and showing excellent pipe technique. Liam Richards and Luke Harrold had a good battle for first place in the U12 boys’ ski category, both incorporating flairs and grabs in their runs and showing great style, Liam coming away with the win.

With the halfpipe results in the bag, competition moved across to the Captains Basin and the K2 Ski Freeride venue on the Tulips run.

U16 competitor Harry Cookson had the biggest move of the day, stomping a big double drop, a 360, and two smaller airs with clean grabs for the win.

Very first rider out of the gate in the boys’ U14 category, Obie Simper laid out some fast flowing turns before hitting the big double, holding on to the landing and maintaining good flow through the rest of the course with two more airs for good measure and a gold medal. Gustav Legnavsky came in a tight second with some good drops and a left 360 in his run but not quite as technical a line.

Georgia Chambers topped the U14 girls’ field, laying down a creative line with good strong skiing. Mia Gerrard was a strong second, earning a big line score but having to hesitate a little due to snow conditions.

The 2018 Junior Freestyle Nationals are due to wrap up tomorrow with the Ski and Snowboard Slopestyle at Cardrona Alpine Resort. 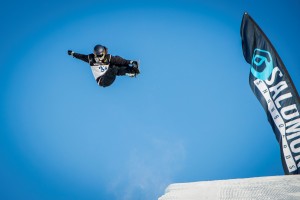