Lake Wanaka, NZ – (1 October 2013) – Day two of the Snow Sports NZ 2013 Freeski & Snowboard Junior Nationals took place at Cardrona Alpine Resort today. Young competitors aged between five and 18 contested the Smith Snowboard Cross and Snowboard Giant Slalom. High winds caused the postponement of the Salomon Ski Slopestyle for the oldest competitors who were scheduled to use the Upper Heavy Metal Park. However, competition for the younger skiers was able to take place in the Westons Gap Fun Park.

Slopestyle competitors faced challenging conditions with hard snow and gusty winds; however this didn’t stop them pulling out some impressive performances.

Competition was particularly fierce in the Ripper boys’ category (born 2002-2003) and many seemed fearless in their attempts to put down the best possible run. Second placed Jasper Klein performed a corked rotation and Head Judge, Mike Hygemann, commented that “normally this would make him the standout winner.” However, Jasper was just pipped for the top spot by Logan Watkinson whose run was slightly cleaner and more controlled.

Although he didn’t earn himself a podium spot, judges couldn’t help but be impressed by Sam Willems, also in Ripper boys, who made two attempts at a backflip, crashing on both occasions but seemingly undeterred by his heavy falls.

Youngest competitor, three year old Zora Legnavsky, had the Ripper girls’ class to herself and won judges over by waving to them on both runs. She also made an enthusiastic attempt at both rail features (with a little help from Mum).

Ruggies boy Finley Melville Ives backed up yesterday’s win in the Smith Ski-Cross, dominating his age division in today’s slopestyle. Luca ‘Huck’ Harrington completed a “sensational” first run to win the Grommet boys’ class. After landing his first jump switch, Luca wowed judges by completing the rest of the run switch, knowing that this “would probably score more points” and, more to the point, “I like going switch, it’s fun.”

Kirsten Blackley faced tight competition in the Ripper girls’ class and admitted to a few pre-event nerves but once on course the nerves were forgotten and she topped the category with a smooth and fluid run.

While, in the Shredder girls’ Fiona Murray put together an “outstanding” second run and was a convincing winner in her age group.

In the Smith Snowboard Cross racers first completed a single time trial on the Speed Zone Gravity-cross track. The four fastest racers in each age category then moved through to finals, racing head to head. The high speed action was almost as nerve wracking for the spectators as it was for the racers. As winner of the men’s Junior category, Tim Herbert explains, “you’re either trying to overtake or not be overtaken. There’s always the chance that someone will clip you and you both end up going through the fence but it’s way too much fun not to give it a go.”

Campbell Melville Ives kept up the family’s winning tradition, placing first place in boys’ Ruggies. It was a family affair for the Lyell sisters, Cassandra the fastest girl in the Ruggies’ age group and Charlotte in Grommets. Valentino Guseli took out boys’ Grommets.

Following on from yesterday’s snowboard slopestyle Cool Wakushima was once again the only female competitor in Ripper girls. Mitchell Davern was fastest boy in the age group. Georgia Crisp and Ethan Cruise were first place-getters in shredders.

Lucy Hayes and Matthew Cox both backed up yesterday’s winning results in the slopestyle, today the fastest competitors in the Youth age group for Snowboard Cross. Tim Herbert and Georgia Baff were the winners of the Junior age group.

The slalom course was set on the Race Course Trail and racers competed side by side two at a time. Each racer completed two runs with the combined time deciding the final placings. The identities of the talented all-rounders had started to become apparent and the afternoon’s prizegiving saw many of the same faces climbing the podium. Winners of the age groups were:

Results from events are available: http://snowsports.co.nz/latest-news/gutsy-performances-from-young-competitors-at-day-two-of-snow-sports-nz-2013-freeski-and-snowboard-junior-nationals/

Competition continues until Friday with the following events: 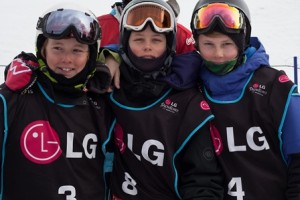