2013 looks set to be another golden year for Paralympic skier Adam Hall of Dunedin. Competing in extremely cold conditions at the Winter Park Open in Colorado from 1-3 January Hall welcomed in the New Year with three gold medals.

Hall competed in two Super G races on Tuesday 1 January, one of which was classified as a US Nationals race and the second as a North America Cup race (Nor-Am); and a Slalom race on Thursday 3 January. Under International Paralympic Committee Alpine Skiing (IPCAS) rules, racers compete in one of three classes depending on their impairment: Visually Impaired, Standing and Sitting. Adam Hall, who was born with Spina Bifida, competes in the Standing category.

In Tuesday’s US Nationals Super G Hall dominated the field with a 4.87 second margin of victory and upped the ante in the following Nor-Am race to win by 6.19 seconds. Hall’s coach, Scott Olson called it “a great day for Adam Hall” and Hall remarked “I was extremely happy with how my day went and couldn't have asked for a better start to the New Year.”

Thursday’s Slalom race began in what Hall described as “insanely cold temperatures close to minus 30 degrees.” The sub-zero temperatures did not appear to hinder his performance, however, and Adam Hall soon heated up the race course with two blistering slalom runs which saw him take out a third gold medal.

“I was pretty happy with how my performance was today. I threw down two solid runs and came away with the victory,” he remarked.

Hall bases himself at the Winter Park resort in Colorado for the Northern Hemisphere winter and said that he had enjoyed racing “on home territory.” The Northern Hemisphere season thus far has seen Hall produce very positive results and he says he is “extremely happy with how my skiing and training is going over here early season and am excited to see how the rest of the season unfolds.”

Emerging adaptive sit-skier Corey Peters (New Plymouth) also competed at the Winter Park Open and continues to impress coaching staff with his ability to learn and improve from race to race. He had a good result in Tuesday’s GS Nor-Am claiming sixth place, 5.55 seconds behind the winner of the Sitting class, Heath Calhoun of the USA. In Thursday’s Slalom he placed seventh.

“Having more time to work with the new shock I'm using this season has allowed me to get the settings dialled in a lot better and the set-up is now providing a smoother ride than previously," explains Peters.

“Working closely with coaches Scott and Kurt we have made some really positive steps in improving my technique and body position and also my race line. I’m really happy with the progress and every race I am gaining valuable race experience and confidence in my ability. I have now qualified for World Cup races in the Speed events with my IPC Points.”

Both Corey and Adam will now begin preparations for their next event in Kimberly, Canada at the end of January. 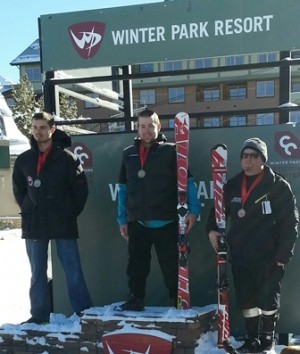