Eighty-six men started representing 22 countries while the women’s field had 17 different nationalities among the 49 starters.

Chairman of the ANC committee David Howden was upbeat about the conditions on the course following a freeze overnight which set it up for the day’s racing.

“The colder temperatures made all the difference and gave us a hardpacked course which provided for fantastic racing. It certainly held up well for both men’s and women’s events.”

Read (25), who is son of famous Canadian Olympic downhill racer Ken Read, was excited about taking the title which will help him in his campaign for 2018 Olympic selection in South Korea.

“The first run conditions were amazing and even though I started in bib 19 I had a good chance. It was softening a bit in the second run but you could still feel it underneath. I think these races (at Coronet Peak) are some of the best you can get in the Southern Hemisphere in our summer.”

The fastest time in the second run was put in by Sweden’s Mattias Roenngren (23) in 53.66 while second place overall in the event was taken out by Magnus Walch (25) of Austria who is no stranger to the podium at Coronet Peak. He completed his two runs in 55.32 and 54.72 for a combined time of 1.50.04.

Sara Hector (24) of Sweden who won the recent ANC giant slalom at Thredbo in Australia and is ranked 20th in giant slalom was in blistering form winning both runs for an overall time of 1.50.61. She recorded 55.69 and 54.92 to take the lead ahead of Norway’s European Cup champion Kristin Lysdahl (21) in 1.51.87 who was fourth fastest in the first run in 56.62 and pulled out all stops to move into second place in the final with 55.25. Lysdahl was second in yesterday’s ANC giant slalom at Coronet Peak.

Third place was shared by Katharina Liensberger (20) of Austria, who was gold medallist at the 2017 World Junior Championships, and Norway’s Mina Fuerst Holtmann (22) who won yesterday’s ANC giant slalom at Coronet Peak. The pair had a combined time of 1.51.90 with Liensberger clocking 56.45 to be in second place in the first run and inn the second 55.45.  Holtmann was third fastest in the first run in 56.47 and completed the second in 55.43.

Hector was delighted with her win, her first time competing at the Audio quattro Winter Games NZ.

“This is my first time racing in New Zealand and today I was very happy with my race. The conditions were good on the course and the weather was wonderful.”

The Audi quattro Winter Games NZ ANC FIS slaloms will be held at Coronet Peak on August 30 and 31. The second men’s FIS ANC giant slalom is scheduled for September 1. 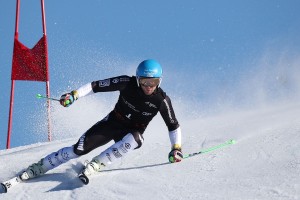