Gold for Adam Hall at First Races of the Season

The three-day race series is being held at Winter Park resort in Colorado which serves as the Northern Hemisphere training base for the Cardrona NZ Para Alpine Ski Team. Also racing were Corey Peters (New Plymouth), Aaron Ewen (Auckland) and Samuel Tate (Dunedin).

Following heavy snowfalls earlier in the week the soft course conditions proved challenging for many competitors. However, Adam Hall put his years of experience to good use and recorded the two fastest runs of the day in the men’s standing class. Masahiko Tokai (JPN) finished second and James Stanton (USA) third. NZ’s Samuel Tate finished 11th.

“It’s really good to be back into race mode,” says Adam. “It has been around nine months since our last race and it’s great to start 2017 on the right note. I’m happy to see training transferring into racing.

“It’s also great to see some of our new guys getting some solid race experience and starting off well by gaining some of their first race points.”

“I really enjoyed racing but I’ve still got a long way to go,” says Aaron.

The Giant Slalom is scheduled for tomorrow but with 30cm of snow forecast to fall overnight, the schedule may be subject to change.

“This is a good build up before heading to Europe over the weekend,” says Adam. He and Corey will travel to Innerkrems in Austria to compete in World Cup races from 11-15 January. Qualifying for the 2018 Paralympic Winter Games is now underway and both athletes will be looking to secure early season points.

Live results for all World Cups will be available at: www.paralympic.org/alpine-skiing 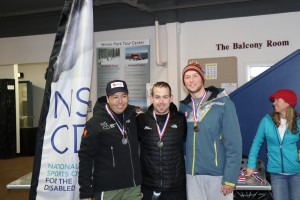