Kranjska Gora, Slovenia (12 February 2017) –  Queenstown ski racer Alice Robinson has positioned herself as one of the world’s best ski racers for her age group, winning the U16 Giant Slalom and finishing second in Slalom at a top level youth race in Slovenia over the weekend.

Alice was one of five New Zealanders competing at the Pokal Loka event in the resort of Kranjska Gora along with Keir Roberts (Queenstown), Will Cashmore (Auckland), Vanessa Lover (Norwegian based Kiwi) and Sam Woods (Auckland). The event – which was opened by the Slovenian Prime Minister – is one of the most prestigious FIS children’s races and attracts entries from all the major European nations traditionally recognised as the power houses of alpine ski racing.

“It was exciting meeting other countries' athletes and seeing the calibre of teams,” says Alice. “The organizers were really welcoming and on the first night the Slovenian Prime Minister came out which showed how much it meant to the country. Overall it was a very exciting thing to be a part of.”

Knowing that she faced stiff competition but confident in her own ability, Alice set her sights on the podium.

“I really did want to win,” she says. “I had no idea whether that was even possible but I wanted an honest comparison to the competition in Europe. I'm happy with how I skied. I had some mistakes but recovered and kept charging to the finish and it worked out.”

Alice will now travel to Croatia to compete in her next event – the Zagreb Trophy – along with Keir Roberts. The event takes place over two days from 14-15 February at Zagreb-Sljeme. 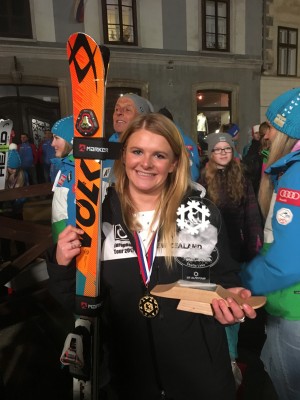