While pleased with his early season results, calling it “a good start”, Corey says he still has plenty to learn and today was a question of “close but not quite.”

Corey attacked his first run and initially led the field with the U.S.A’s Tyler Walker in second, 0.09seconds back. However, skiing “a bit too conservatively” on his second run Corey lost the lead to the American racer and finished in second 1.68seconds off the pace.

“It was just like Sochi,” commented Corey who won the silver medal in Giant Slalom at the Paralympic Winter Games in March this year having also posted the fastest time on run one before dropping back to second place on his final run.

“I held back too much on the second run and when you’re talking tenths of a second (between first and second place) you can’t afford to do that. It’s a fine line between going too fast and blowing out and holding back and coming second. I need to learn where that line is.”

Adam Hall (Dunedin) finished fourth in the standing class today, the first time he has competed in Giant Slalom for several years. Adam’s speciality is the technical discipline of Slalom and he placed first in this discipline yesterday.

The Giant Slalom podium for men’s standing class went to: 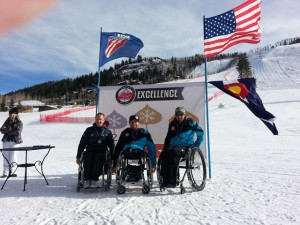