Queenstown, New Zealand (8 August 2017) –  New Zealand’s top alpine ski racers were back in action today at Queenstown’s Coronet Peak ski area for The Coronet Cup Giant Slalom, following on from the National Championship Giant Slalom contested yesterday (Monday). It would prove to be a challenging day’s racing with many top ranked racers failing to finish their two runs.

Racing once again took place on the Outwide Run in the Rocky Gully Race Arena with the female field of 55 competitors first in the gates. Anyone expecting a repeat of the previous day’s results was soon surprised as the top three placegetters – Alice Robinson (NZ), Storm Klomhaus (USA) and Bettina Schneeberger (SUI) - all recorded DNFs on the first run.

Georgia Willinger “charged hard” and was the fastest of the NZ women; after the first run she was sitting third overall and 0.38s behind Barbara Kantorova (SVK) at the top of the table.

Recovering from a back injury sustained in an earlier crash, Christchurch racer Georgia Bushell put together a confident first run, skiing well through the technical section at coaches’ corner and into 20th place, second fastest New Zealander.

“I could have hunted more speed on the flats,” she said. “I generally ski better on second runs so I’m feeling pretty good for run two.”

Flat light and soft snow conditions caused problems for the NZ men on their first run.

“I backed off a little bit too much because of the low visibility and bumps,” said Willis Feasey (Twizel).

Fastest Kiwi on course in fifth place overall and 0.52s behind race leader Andreas Zampa (SVK) on run one, Feasey was still feeling confident of improving his ranking on run two.

“I’ll need to be more aggressive on the second run,” he said.

After narrowly missing out on a podium spot in yesterday’s racing, Queenstown’s Adam Barwood looked to be on track for a strong result today, recording a finishing time just 0.24s off the lead before being disqualified for missing the second to last gate.

“The skiing went really well, much better than yesterday, but I found myself off line right at the end and it was too late to correct,” he explained.

Run two got underway after the course reset. Georgia Willinger was able to maintain her position as fastest New Zealand woman but was disappointed not to “go hard enough” and slip back into fourth position overall, 1.65s off Kantorova’s winning time. Neja Dvornik (SLO) finished second and Anja Schneider (SUI) third. Georgia Bushell pushed hard to improve her time on run two, managing to pull back from a near crash and improve her overall ranking to 18th. Livvie Thompson (Queenstown) was the third placed Kiwi, finishing in 25th place.

Of the 60 men who started the second run only 41 were able to complete the course with NZ’s Willis Feasey among the long list of DNFs.

“I was trying to go straight before the flats but in the bumpy conditions it was probably too straight and I got bounced low and out after four or so gates.”

In the end, only three Kiwis would finish the race with second year FIS racer, Ben Ellis (Queenstown), achieving the best result in 30th. Pleased to get through the course “unscathed” he described the race as “good experience”. Ethan Baxter-McAsey (Wanaka) was 30th and Jay Sherlock (Auckland) 40th.

Racing continues at Coronet Peak tomorrow (Wednesday) with the National Slalom Championships followed by the Coronet Cup Slalom on Thursday. 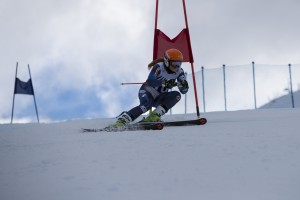