Lake Wanaka, New Zealand (1 October 2014) –The Salomon Ski Halfpipe and K2 Snowboard Freeride were the order of the day at the 2014 Cardrona NZ Junior Freeski and Snowboard National Championships today. The run of fine weather continues and competitors and spectators enjoyed blue skies and sunshine for their third day of competition.

In a new format for 2014 the younger competitors, Ruggies and Grommets, competed in the smaller size International pipe while Rippers, Shredders, Youth and Junior competitors pushed their skiing to the limit in the Olympic pipe which measures 22ft high, 21m wide and 160m long. Competitors had two attempts to impress the judges with their tricks and the better of two runs counted as their overall score.

Gustav Legnavsky was the stand out performer in the Grommets’ category, winning with his first run and demonstrating a variety of grabs and a clean left 3. Top honours in Ripper boys went to Jasper Bloomfield who impressed judges by spinning both ways, also using a good variety of grabs and keeping amplitude consistently high.

Maggie Little had another successful day of competition, once again taking the win for Shredder girls. While Nico Porteous also backed up another win, dominating the field in the Shredder boys’ age group. His outstanding run featured a left 5, right 3 tail, switch left 7 to right flair to left flair to alley oop flat 5 Japan. Ben Harrington put together a solid performance for second place spinning both ways in the pipe and nailing his grabs.

A crash on his first run left Finn Bilous shaken but thankfully unhurt.

“I was feeling really nervous before my second run and had to take some time to get my head in the right space,” he explained. Taking a more cautious approach yet still managing to gain some of the highest amplitude of the day, Finn landed his second run on his feet to claim the win for Youth boys. Felix Klein also shook off a recent injury, boosting out of the pipe and landing only three points behind Finn on the scoreboard.

In the Junior boys’ group Jackson Wells raised the bar with his first run which featured a left 5, right 5, left 7, switch left 5, switch left 7 to switch butter 7 and was easily good enough for top step on the podium.

The snowboard freeride competition took place on the Tulips run on the lower left side of Captain’s basin. Competitors were given two runs to earn their highest score and were judged on fluidity, control and line choice. The firm snow conditions provided a challenge and Head Judge Mike Hygemann stressed that safety and control were the priorities of the day.

For safety reasons Ruggies started on the skier’s right, a third of the way down of the course. They handled the conditions well and impressed judges with their well-controlled runs. Zedyn Fellows stood out with a fantastic run and scored highly with his technical run.

Grommet boys’ first place went to Zephyr Lovelock who had a great first run and scored well for a tweaked method. Second place, not far behind with two consistently good runs was Valentino Guseli.

Ripper girls featured only two competitors but both were strong riders. Hannah White put together a flowing, controlled run for first place with Charlotte Lyell only just behind in second. Ripper boys’ first place was awarded to Zak Baikie whose first run comprised two big drops and a switch to half cab.

The Shredder girls impressed the judges with strong aggressive riding which would have seen them challenge for podiums amongst the boys’ field. Cool Wakushima put together an outstanding performance with a fast flowing run top to bottom.

Shredder boys’ Felix Ferris incorporated a huge Indy air and great switch riding in his run and was rewarded with top score for his age group.

Phoebe Crawford won the Youth girls’ age group with consistent, controlled riding and a gutsy 180 off a rock drop which none of the other girls had attempted. In Youth boys, first place winner Ethan Cruise’s run featured good flow right while the drops got bigger and bigger as he progressed down the course.

Corrah Phillips also opted for a technical line and nailed it with speed and control for first place in Junior girls. Meanwhile, in Junior boys Carlos Garcia Knight continued his winning streak, looking confident on course and nailing down the day’s top score with a half cab off a big technical drop. 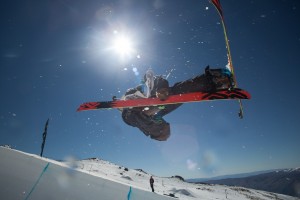