Situated in the Aosta Valley at the foot of the south face of Mont Blanc, Courmayeur presents one of the most spectacular arenas in the world for skiing and snowboarding. The event was originally scheduled to take place on Friday 17 January but adverse weather conditions left competitors with a nervous five day wait until Wednesday morning when the weather finally cleared.

For Sam Smoothy the weather delay turned out to be a bonus. Following surgery to remove his appendix two weeks ago Sam had planned to sit out the Courmayeur stop; however with a few extra days’ recovery time in hand he felt ready to compete yesterday and was able to achieve a solid 11th place finish.

Sam is the veteran of the Kiwi contingent, with 2014 his fourth season on the FWT. He is looking to improve on his best season in 2012 where he achieved three FWT podiums. Yesterday’s result, while not a career best, was a positive indication that recovery is on track and Sam will be a name to watch on the 2014 FWT.

Speaking after the competition, Sam explained: “With only a handful of runs that morning under my belt due to having my appendix out, I was just looking to ski clean and see how the body reacted to its first hard run. Keeping my fluidity up and taking some airs I ended my run with one of the ugliest 360 of my life but got it around clean and just missed top ten placing 11th.”

Ruari Macfarlane, the only snowboarder on the New Zealand team and a FWT rookie, had the tough task of being the very first competitor of the day.  He came out firing with a very aggressive top section into a styling method. In the fresh powder he seemed to catch an edge, sending him tumbling out of contention for a top placing before another risky air into a chute at the bottom bumped him down the rankings with a final placing of 10th.

Skier Neil Williman, also competing on the FWT for the first time in 2014, took a fast and fall line approach to his run with a double drop which he stomped cleanly. Coming off an illness and injury, Neil was happy with his run and ski form. He finished in 21st place and is looking forward to stepping things up in the next competition in Chamonix in a few days’ time.

Charlie Lyons kicked off his tour with his super solid, calculated skiing but, in his own words “didn't have enough air” in his run to have him higher on the rankings against such an aggressively competitive field. He finished in 23rd place.

“Today was tough,” he commented. “I made a couple of errors in my run and my line choice wasn't the best Charlie made his debut at the 2013 FWT and had consistently strong results including third place at the Kirkwood stop. He finished the 2013 season ranked ninth on the tour.

The 2014 tour features six venues throughout Europe and America and has a total prize purse of 400,000 USD. Of the six events of the 2014 FWT, Courmayeur Mont Blanc is the one event only featuring male skiers and snowboarders. Male and female athletes will both be in action on Saturday 25 January at the FWT stage at Chamonix-Mont-Blanc, France. 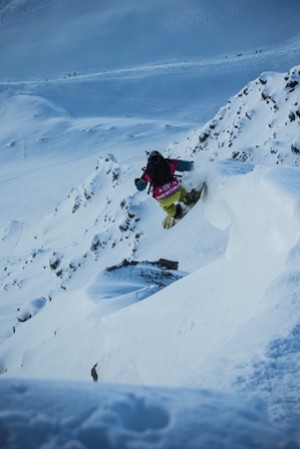