New Zealand’s top cross-country skier, Andrew Pohl had a solid race but just missed the podium with a fourth place finish in 46:04:37. “There was a great mixture of terrain in today’s course. The warm temperatures and bit of rain made it critical for the wax technicians’ decisions today and the Korean team got it right, they were all very strong today,” he said.

As hosts of the 2018 Winter Olympics the Korean cross-country team has been working hard during their recent six-week training programme at Snow Farm NZ, and this was reflected in today’s results.

The course covered 10km for women (4 laps) and 15km (4 laps of an extended course) for the men, with a mass start for both fields. Correct waxing played a critical role for the athletes today to ensure a good grip on the climbs and smooth gliding for the downhill sections.

Leading from the start of the men’s race, Sochi Olympian Jun-Ho Hwang maintained his dominance around the four laps to cross the finish line first in 0:44:01. He was followed by countrymen Seong-Beom Park, 23 seconds later and Eun-Ho Kim, yesterday’s sprint winner, who took bronze in 0:44:38.

Hwang was excited about his win, “The conditions were great and my skis were very good for the snow, I had very good grip. I was so happy on the final climb knowing I could get to the finish line first,” he said.

In the women’s field, pre-race favourite Chae-Won Lee’s strong performance in a time of 0:36:06 ensured she took the winner’s title and a gold medal. Slovenia’s Barbara Jezersek crossed the line in 0:37:22 for silver and yesterday’s sprint winner Olivia Bouffard-Nesbitt of Canada took bronze in 0:38:31. 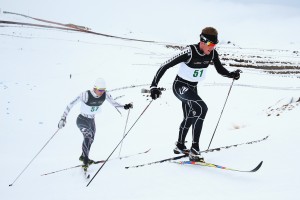