Sochi, Russia (14 March 2014) – Snowboarding made its Paralympic Winter Games debut in Sochi this evening with New Zealander Carl Murphy proud to be a part of the historic occasion.

Carl, a below-the-knee amputee, competes in the snowboard cross discipline and rides his snowboard with the help of a custom designed carbon fibre prosthetic leg. At the Sochi 2014 Games two medal events would be contested for men and women in the SB LL class which includes athletes with leg impairments.

Snowboard cross takes place on a man-made course constructed from a variety of terrain features like bank turns, various types of jumps and rollers. The race format at the Paralympic Winter Games allows each athlete to complete three runs down the course with their finish time of their best two runs determining the final results. There is only one rider on the course at a time.

Carl Murphy has been dominant in the sport for several years and until recently held a ranking of joint number one in the world. A knee injury in December put him out of action for several weeks meaning that he did not compete in the world cups leading into the Sochi games. Following a period of rehab Carl returned to snow feeling confident in his ability despite some ongoing niggles with the knee.

Ahead of tonight’s race USA's Evan Strong and Mike Shea were widely touted as the ones to beat. Strong won the Paralympic Test Event in 2013 at which Carl Murphy won the bronze medal. Fellow American Mike Shea also had potential to provide stiff competition having won the 2013-14 IPCAS Snowboard World Cup overall title last month.

Evan Strong and Mike Shea came out charging, setting times to beat around the 52s mark with their first runs. New Zealand’s Carl Murphy put together a solid run but appeared to struggle for speed at times. After the race he explained that the morning’s training run had brought another setback.

“I had a crash in training this morning and I think that maybe threw me a little bit. I couldn’t quite put it together.”

His first run time of 54.62s had him in third place before another American rider Keith Gabel came home in 54.02 relegating the Kiwi to fourth place.

The second run saw Carl post a faster time of 54.48s but with his main rivals also upping the pace Carl would hold on to fourth place. Coming into the third and final run the Kiwi really would have to fly to get in amongst the medals.

“He was pushing hard for a faster time, it was always going to go one way or the other, podium or crash,” said Carl’s coach Adam Dooney after the race.

The podium it wasn’t. Taking a corner too early Carl took a tumble early on the course, falling out of medal contention in the process. His confidence appeared shaken and he fell again on the way to the finish line.

Carl Murphy finished in fourth place with the American riders taking a clean sweep of the podium, Evan Strong in the gold medal position, Mike Shea in silver and Keith Gabel bronze.

While disappointed by the outcome of his day, Carl said that he was still proud to have had the opportunity to compete at the Paralympic Winter Games particularly given the injury impacted build up.

The final competition of the Sochi Paralympic Games for the New Zealand team takes place on Saturday night (NZT) when Corey Peters takes on the Giant Slalom.

The events will be livestreamed on attitudelive.com/paralympics.
TVNZ will be the free-to-air broadcast partner providing news, highlight packages and OnDemand content for the duration of the Sochi Games. 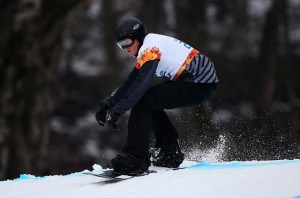