Extreme Park Rosa Khutor, Russia- (16 February 2013) – An encouraging fourth place at the FIS World Cup halfpipe contest in Russia has signalled that Wanaka’s Byron Wells is back on track after a recent injury to his leg.

The halfpipe world cup event was part of the Winter Olympic test event being held 12 months out from the 2014 Sochi Games at the newly constructed Extreme Park at Rosa Khutor. Byron Wells was one of five New Zealanders competing in the halfpipe; brothers Jossi and Beau-James also in the mix along with Wanaka’s Lyndon Sheehan for the men and Janina Kuzma in the women’s event.

Weather conditions have proved challenging throughout this Olympic test event with the slopestyle portion of the World Cup having to be cancelled all together due to lack of snow. The halfpipe competition looked as though it may suffer a similar fate; while heavy rain caused flooding in the village, snow and thick fog covered the pipe. Event organisers were forced to postpone the competition until visibility improved. When competition did get underway wet snow made for slow, sticky conditions.

On only his fourth day back on skis after a four week injury break, some may have expected that Byron Wells would take it easy, hoping simply to get a few more Olympic qualification points safely under his belt. Not so. A crash and lost ski on his first run only encouraged Wells to aim higher, showing impressive amplitude on a second run which included switch 1080, right side 900, left side double cork 1260, alley oop flat spin 5 into 900. Were it not for the missed grabs on the first and last hits, a podium spot was likely.

“I’m pleased with the overall result but disappointed with the way I skied,” remarked Wells after the event. Hard on himself, given that this was a come-back from injury? “You have to be,” says Wells, “you can’t afford to be complacent.”

Also plagued by injury this season, Jossi Wells was “happy to make the finals” at the Olympic test event, finishing in ninth place. And like his brother, with a finals spot secured, he “just wanted to go for it.” Which in this instance meant attempting the trick which three years ago he was the first in the world to land, a switch double cork 1080.

12 months out from the Sochi Winter Olympic Games and the oldest Wells brothers already seem fired up. “It’s cool to come and check out the venue,” says Jossi. “We’re pretty excited.”

Beau-James Wells finished in 15th place after another solid result for the season.

Lyndon Sheehan placed 22nd, opting to play it safe and “land a nice easy run” following a crash in training which resulted in a sore shoulder.

In the women’s event, Janina Kuzma also took a cautious approach which unfortunately meant that she missed out on finals qualification, finishing in 14th place.

Torin Yater Wallace (USA) was the winner of the Sochi World Cup men’s halfpipe with Gus Kenworthy (USA) in second and Canada’s Mike Riddle third. Virgine Faivre (Switzerland) took out the top podium spot for the women with Roz Groenewoud (Can) second and Keltie Hansen (Can) third.

Snow Sports NZ Head Park & Pipe Coach Tom Willmott is pleased with his team’s performance. The team’s main focus is on gaining Olympic qualifying spots under a quota system which requires athletes to be ranked within the top 40 in the world. With Byron Wells, Jossi Wells, Beau-James Wells and Lyndon Sheehan currently ranked within the top 30 for men’s rankings and Janina Kuzma in the top 12 for women’s rankings, New Zealand looks set to gain four men’s and one women’s Olympic spots.

Willmott describes the Sochi test event as “a golden window of opportunity” for the New Zealanders with the chance to experience the 2014 Winter Olympic venue “invaluable.”

“We’ve got a very clear idea of what’s ahead of us now which will help our preparation.”

The Sochi test event has also been an opportunity for New Zealand’s top Skeleton racers to check out their Olympic venue at a World Cup event. Ben Sandford finished in eighth place in the men’s event and Katharine Eustace in 17th place in the women’s event.

Snow Sports NZ’s High Performance Director, Ashley Light, has been on hand to test the logistics of sending a team to the Winter Olympics in Sochi in 12 months’ time.

“At this stage, much of the venue is very much under construction but I have no doubt that come February 2014 the fields of play will be fantastic. Overall, the test event has been a success for the NZ team, both on and off the field of competition,” says Light. 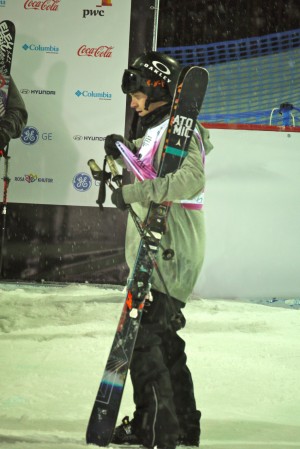