The conditions were challenging, with heavy snow falling throughout the second run. This was also Corey’s first time back competing in an international field in almost three years as the Covid-19 Pandemic grounded our Para Alpine athletes last Northern Hemisphere season.

Corey explained “It was obviously quite exciting to be back in the start gate but also I was quite anxious because it had been so long since I had felt those race nerves.”

Corey put down a solid, yet conservative run one and was sitting in 6th position, +4.75 behind the current leader.

“My first run was quite conservative, I was more concerned about getting to the bottom in my first race back, but in ski racing when you ski conservatively you lose a lot of time to your competition.”

Heading into run two, with the podium within reach, Corey blasted out of the start gate. “I needed to come in with a bit more aggression and attack the course, I feel quite proud of run two. Run two was definitely the better of two runs for me.” Said Corey.

“Today puts me in a good frame of mind a few weeks out from Beijing knowing that I am still up there with the best of them, although Giant Slalom isn’t my best event. The true test will be in the Super-G next week in Sweden.”

Jesper Pedersen (NOR) took the win today by an impressive +6.51 lead over Igor Sikorski (POL) in second. Andrew Kurka (USA) rounded out the podium in third. 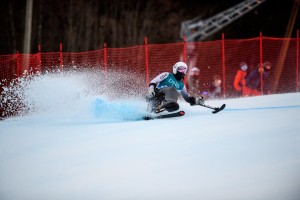